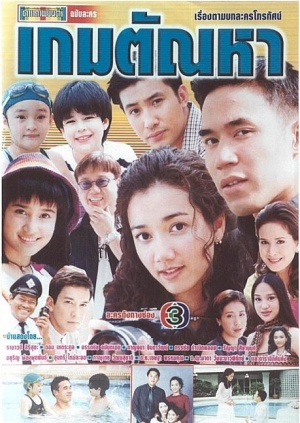 Pupae is a journalist and she's quite good at what she does. She lives with her grandmother and her younger sister. Her father was murdered but everyone keeps insisting that he died in a car accidents. Pupae and her family know that there is more to it than that and that Dom's family is linked to it though she doesn't know that Dom is related to the family. (yet..)

She first meets Dom who just returned from overseas, when a lady was robbed on the street and was stabbed because she resisted. Pupae being a good citizen looks around for someone to help her and at this time Dom stops his car there and she makes him take her and the lady to the hospital. Dom gets weak at the site of blood so he's nervous and driving unstable so he switch places with Pupae. When they reach the hospital Pupae goes in to assist the lady and Dom leaves immeadiately and gives a story of his cowardness for Pupae to tell her friends.

Pupae is asigned a story in which she has to go interview Dom's father and she looks at it as a way to get closer to the truth of the death of her father. Dom's family is a private one so they refused to be interviewed and this is also when she learns that Dom is the youngest son of the family. Being a hard-headed reporter she comes back everyday to ask over and over again for an interview.

She also meets Dom's nephew who is a lying and munipulative kid. When he does something wrong he places the blame on others. Anyway as the movie goes on Dom buys the newspaper that Pupae works for and he becomes her boss. They spent more time together because he follows her on her assignments and help her out and learns of her talents in the journalism field and admires her for it.

In the meantime Kik Mayurin is also in love with Dom and she tries everything that she can to separate the two. She also uses her connection to Dom's father to try to get Dom to maarry her but Dom just bluntly dismisses it cause at this point he is in love with Pupae.

There are internal conflicts with Dom's older brother and his oldest one is obsessed with money or something and he commits embezzling and illegal things and at one point he sacrifices his son to be kidnapped so that he can get ransom money from his father. Pupae has been noticing some of these things and she ends up finding the house that they kept Dom's newphew in but before she could rescue him she herself gets locked in with him. Anyway they end up escaping and they hid in an abandoned buidling and the nephew is starting to like Pupae now. Dom's nephew get sick and Pupae finally gets a whole of Dom and he coms to get them.

At this point the truth of their feelings of obvious but Pupae's grandmother refuses to let her have a relationship with Dom or his family because she still believes that they are the one who took her son away from her. Pupae also misunderstands Dom at one point because of Kik Mayurin's words but they work things out.

One day Pupae's mother headed to Dom's house and she asked the question that she's been wanting to ask and finds out that Dom's father faithful servant had indeed order someone to kill Pupae's parents but Dom's father had no clue of his action and so he bowed down to Pupae's grandmother feet and begged for forgiveness.

Anyway everything returns to normal and one day Dom and Pupae recieves a call that her grandmother and his father are arguing and they rush over but they are scared of they have to say about it. When they get their the learn that they were fighting about when the two should be married. Pupae gets embarrassed and she goes outside and everyone tells him to follow. They talk and she says that she doesn't know if she wants to be in a relationship and so on and he tries to persuade her and i think all she wanted was for him to say that he loves her and it ends happily with him carrying her dancing around the pool.