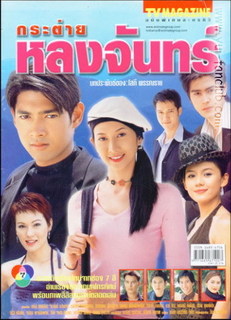 Kratai is a plain & clumsy girl, and she works as a nurse at a small clinic. One night when she's at her friend's fashion show, she loses her contacts and this is the first time Gorn sees here; when she's on the ground searching for her contacts. She can't find them and puts on her glasses instead, and the whole night she keeps bumping into Gorn. She accidently ran into him with a cake and wanted to help him out by following him into the men's restroom. Kratai instantly falls for Gorn when they first meet. During the fashion show, Kratai is the loudest one when she's cheering for her friend Sukie. Sukie and another of the models, Jida, got into a fight backstage because Sukie was going to wear the dress for the finale and not Jida. On the catwalk, Jida tries to trip up Sukie but ends up being spun around by her and getting dizzy. Jida hates Sukie and claims that the only reason she got this far in the business is because she slept her way up.

Jida then picks on Kratai and because Kratai is someone who never backs down from a challenge, she drinks a whole glass of wine and becomes really drunk. Gorn is raffling off a pin with a picture of a rabbit looking at the moon, and Kratai wins it. She stumbles onto stage to accept her pin and ends up puking on Gorn instead. Gorn, Piwarat, who is Gorn's little brother, and Sukie take Kratai home, and Gorn is carrying her. When Kratai wakes up the next day, she feels really bad for puking on Gorn and his expensive tux and wants to pay for the damages. Kratai then goes to Right Man, Gorn's advertising agency in hopes of meeting him to apologize and pay for the suit. Gorn tells her it's okay and she wouldn't be able to pay for it anyways because it's really expensive.

Kratai ends up following Gorn to a commercial shoot one day and tries to apologize again, and Jida says something to her that causes the 'never back down' part of her to come out again. While she's going up to Jida, she knocks over the props and it ruins the entire scene. Everyone is mad as her, especially Gorn because they're going to be behind schedule. Kratai is sad and wants to apologize so she Kratai quits her nursing job so she can work at Gorn's advertising agency for free. They give her the job of prop girl and she's supposed to help the crew clean up and serve drinks. Jida and her two lackies, Grace and Saowarat, give Kratai a really hard time because Kratai isn't fighting back. Sukie tries to help her out as much as possible but she isn't there all the time.

Eakkatet works with Gorn and wants to be in charge. He tries to sabotage Gorn whenever possible and is jealous because he likes Jida, but Jida only likes Gorn. Kratai causes a lot of trouble on set because she's clumsy and accidently walks into the shoots. One day, they're shooting a commercial for a big client and Sukie, the original model was supposed to be in the commercial but Jida and Eakkatet hire someone to run her over with a car. Luckily, Pirawat is there to push her out of the way, and the only thing is that her face has a small scratch on it, making her unable to shoot the commercial. Jida ends up taking her place. Kratai is supposed to be in charge of making the bubbles in the bathtub for the commercial, so when the bubbles started running out, she accidently grabbed dishwashing liquid instead of the bubble bath stuff and JIda ends up getting rash from it. Gorn is really angry because they're going to be late on the deadline and he yells at Kratai for messing everything up. Kratai is sad and says she's going to quit and runs out.

She tries to make up with going to Gorn's condo and leaving presents on his car and sometimes washes it or dusts it. Gorn thinks that the person leaving him the stuff is a lady that works in the building. Gorn and Jida are supposed to get engaged but on his way there, Kratai and him witness a child get hit by a car and have to take her to the hospital. Kratai tells Gorn to leave for his engagement but after realizing that he can donate blood to the kid, he stays, making him even more late. The engagement was also supposed to be some sort of showing to a top client. Jida gets really angry at Gorn because all the people and photographers have left by the time he gets there. Kratai tries to help out again, but Gorn tells her to mind her own business. Jida gets the wrong idea about Kratai and Gorn after they arrive together to the engagement and Jida's mom is also really angry. At a conference, Kratai busts in and tries to explain to Jida's mom that it was all a misunderstanding, Jida's mom refuses to listen and calls the police on her. Pirawat comes in in time and tells him that nothing can go on because him and Kratai are together, Kratai follows along because she doesn't want anymore trouble. Jida and Gorn make up but Sukie is sad when she finds out that Pirawat is in love with Kratai, because she's secretly in love with him. Pirawat asks Gorn to help him out with Kratai, and Gorn promises to help his brother. Pirawat says the reason he loves Kratai is because she reminds him of his mom.

More stuff happens and Eakkatet tries to overthrow Gorn from a big client and using his new advertising agency, INDY, with the help of Grace, Saowarat, Jida and Jida's mom. They have a contract with a Japanese watch company and try to trick them that Kratai is an upper class girl named Jao Soy Fah, and that she is the perfect model they are looking for to model the watches. Eakkatet makes Gorn lose an appointment with the Japanese trio and thus they break the contract with him and hire INDY instead. They also expose that Jao Soy Fah is a made up person and that it is really Kratai. Gorn is basically reduced to nothing when Eakkatet buys the company. Eakkatet is out of ideas so he steals Gorn's old ideas about the watch commercial and presents it to the trio using Jida as the model.

Gorn gets attacked one day by folks hired by Eakkatet and someone finds him and brings him to a hospital. The little girl Kratai saved in the accident is living at her home up North along with the little girl's grandma. She tells Kratai that Gorn is in a hospital there and she rushes to see him. Kratai also tells Pirawat that she has no feelings for him. Sukie got a job to star in a movie but the director wanted her to do naked scenes and she refused while Pirawat punched the guy for being a pervert to Sukie. Pirawat gets kinda jealous of Sukie and the p'ek from the movie because they spend a lot of time together. One night, Pirawat is really drunk and Sukie takes him home. He complains that no one loves him and says that even Sukie is leaving him. She stays with him for the night and they spend the night together. Sukie gets a job offer from New York and has to decide whether or not she should go.

Gorn gets better because Kratai is taking care of him, and Gorn's old crew tries to find him to get back up on his feet and fight with Eakkatet using his skills. Gorn and the gang kidnap the Japanese trio and present them with a new concept for the watch, using Kratai but a little dressed up. The trio like it and gives Gorn another chance. When they were at Kratai's house they keep meeting a white guy who's lost all his money and they help him out a lot. In the end, he gives Kratai his watch as a sign of hospitality. One day, the guy tells Kratai that he needs his watch back and they find out he's the owner of the watch company and the watch he gave Kratai was the first ever one designed by his grandfather. He gives both Right Man and INDY a chance to present their commercial concepts to him and ends up choosing Right Man.

Jida takes her money out of Eakkatet's company and tries to go back to Gorn now that he's back on his feet. Eakkatet is angry at Jida because he loved her so much but she never cared for him. Gorn no longer cares for Jida because he realizes he is in love with Kratai. Kratai thinks that Gorn is in love with the image of Jao Soy Fah and decides to leave him alone and goes to live at her old house with the little girl and her grandmother. Pirawat finally realizes that he loves Sukie and tries to get her back before she boards the plane to New York. Sukie doesn't get on the plane and comes to take care of Pirawat after she messages her saying that he loves her. Gorn goes to find Kratai, but she is at a festival with the little girl. He ends up telling her that he loved her eversince he saw her at the fashion show looking around for her contacts. She also confesses her love to him and says that she's always been a rabbit looking at the moon. The little girl hides behind a bush and giggles while she comments that they were both rabbits looking at the moon.