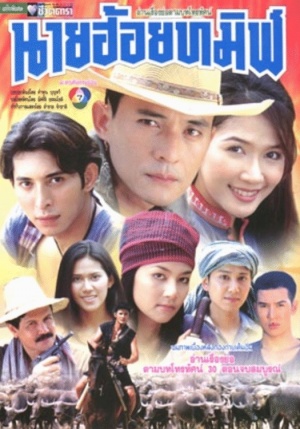 Nai Hoi is married to Kum Keaw’s sister and he his job is to take the village buffalo out to the city to sell and kill them. His wife is very sick and she really doesn’t like the fact that he does this. She believes that it is very sinful. There are many young village people that want to be a Nai Hoi. Anyway his wife dies while he is away on one of these expeditions. Kum Keaw blames him cause he wouldn’t listen to her. her sister also leaves Nai Hoi to her care and she vows never to let him have another wife. As she is over protective many people think that she just wants to keep him for herself. She of course yells and pouts in anger saying that it isn’t true.

The village was poor and they needed money so they asked him to go on another one of his buffalo things and he agrees. Telling Kum Keaw that this will be his last one. She pouts at him and asks to come along and he refuses saying that it’s no place for a girl. She also meets the antagonist of this drama and he offers her a place in his parade. Thinking that she can ditch him later and join Nai Hoi’s parade. She goes with the bad guy and on many occasions he tries to rape her and she finally escapes and Nai Hoi came to help her. She is feisty when it comes to any women that comes near Nai Hoi. She was also told by the antagonist that Nai Hoi has a wife is every town that is along the way. Making her think that the night of her sister’s death he was holding some other girl in his arms.

Anyway she joins his parade but he tells her that she is going to have to go back when they reach the next town. Knowing this she fakes sickness and injuries so that she would have to stay a little longer. Along the way they also meet Sang Some and she is the daughter of an old friend of his dad. They hold a grudge against him cause they believe that his father is the reason why her mother died. It is said that Sang Some’s mother cheated with Nai Hoi’s dad and when his dad died she died too. So her dad sent her into the parade to break Nai Hoi’s heart the same way his dad broke her dad’s heart.

When she joins it Kum Keaw is not fond of the idea and they play pranks on one another. Until finally she has to leave because someone gave her some medicine that made you have to go to the bathroom. Poo Shuai Ton is also a Nai Hoi and he fell in love with Sang Some when he laid eyes on her. He volunteered to take her home and they fell in love along they way.

As they continue on their journey the antagonist pair up with more and more people to get rid of Nai Hoi. But they never succeeded in killing him. Although they did take the lives of a couple of his men. Leaving Nai Hoi fired up and wanting to get rid of them. Nai Hoi as of this point was in love with Kum Keaw and had kissed her a couple times out of anger and because he seized the opportunity. In the end they got the help of Sang Some cause she lost her sister and father due to the people she thought was on her side. They eventually got rid of the antagonist and the two couple explored Bangkok and returned home a while later to ask Kum Keaw’s sister’s blessing for her marriage to Nai Hoi. And the next day Nai Hoi & Kum Keaw and Poo Shuai Ton & Sang Some were to get married.