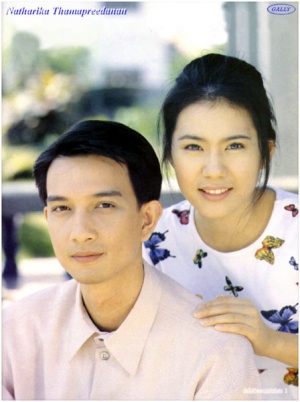 Nuti came from America. He lives with who he believes is his mother and returns to Thailand on business and goes to stay at his friends house. Natharika also knows the people that live there and she goes to bring them something and she sees an injured pigeon and she talks to it. I don’t remember how but I think that her grandpa or someone she knows has a house full of pigeons so she’s used to talking to it. Nuti comes in and sees her talking to it and is surprised and he leans back to enjoy the view and hits the gate and she turned around at the thud and quickly goes away.

I don’t remember how he was in the same house but he lived behind where she was living. I think that she was now living with her father/grandma and they started to talk and got along and he liked her and she secretly enjoyed his company. They fall in love but he had problems that he had to deal with first. His mother that lived in America had a brother who was in jail and was blackmailing Nuti for money or something like that. He also finds out that the woman he believed was his mother was not his mother. She had kidnapped him when he was young. He was introduced to his real mother. Who had gone crazy cause she lost her son.

Nuti and Natharika were getting engaged when his uncle came and shot him. He was sent to the hospital with all his family at his side. When he was better they went to his new house and the women that raised came to say good- bye and ask for his forgiveness. He asked her to stay and his real mother came and took her hands and told her that he wasn’t just her son he was their son. They all went to the back and everyone was there. They popped the cork of a champagne bottle and celebrated.