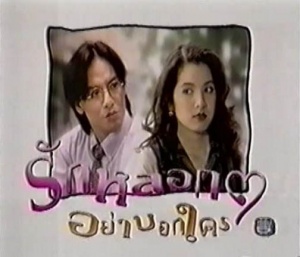 Tananya is an accounting professor at a university in Bangkok. Her parents who live in the province of Pitsanoolok want her to come home and marry a guy that she's never met. Tananya, of course, doesn't want to leave her work and life in Bangkok, and accidentally blurts out what she intended as a small white lie that she already has a boyfriend to make her parents leave her alone. However, her parents decide that they want to come to Bangkok to meet this so-called boyfriend of their daughter's. So with her parents, sister, grandmother, and the family maid on their way to Bangkok, Tananya and her friend, Pleun, scheme up a plan to hire someone to pose as her boyfriend for 3 days in order to please her parents and avoid having to marry the guy that her parents set her up with.

Gon is an aspiring young artist who has dreams of becoming a famous artist in Italy. He was orphaned since he was a kid and was raised by monks. He is friends with Pleun, so when Tananya needed someone to pose as her boyfriend, Pleun suggests Gon. Gon is at first hesitant, but takes the job because he wants the money to go to Italy. He was also pushed to take the job by his girlfriend, Jikgee. The agreement was that Gon would pose as Tananya's boyfriend for 3 days in exchange for 30,000 baht. Tananya makes Gon undergo a big makeover, including cutting his hair and changing his clothes.

When Tananya's family arrives, Gon has to try to please the family, but faces challenges from Tananya's father, who isn't pleased that his daughter is not going to marry the man that he arranged for. Many challenges ensue as the couple has to pretend to be lovers and know each other. The first one came along as Tananya's parents want to know about Gon's career. He merely works at a small drawing booth at a mall, but needs to impress her parents. So he asks to "borrow" his friend's art gallery for the day to impress her parents. Afterwards, Tananya's parents want to meet Gon's parents. However since he was an orphan, he does not know who his real parents are, but instead of lying to him, he decides to take them to visit the monk who raised him. It at first seemed like it was going to be a disaster, but worked out well in the end.

Tananya's father finally starts to give into liking Gon after Gon gets stabbed while trying to fight thugs who steal Tananya's father's wallet. After realizing that Gon is in fact a good person, Tananya's father decides that the two should get married. This was more than what the original agreement was for, so the monetary compensation increases to 100,000 baht and Gon and Tananya play along and get married.