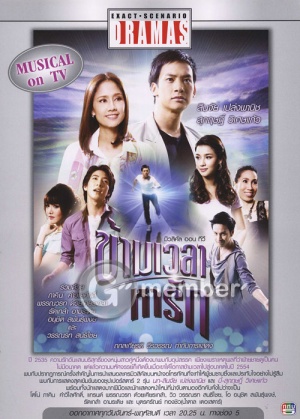 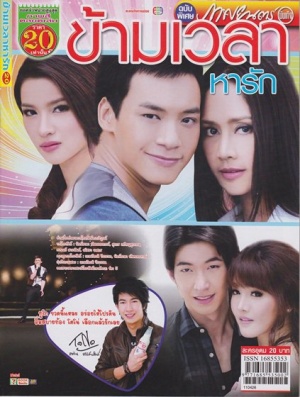 “Crossing Time…in Search of Love” starts out in the year 2535 (1992) of a life of a young man named Phet (Bie). Phet works at a pub as a singer. His dream is to be famous, presumably with his singing. He has a supportive girlfriend named Prae Pim (Vill) and her father disapproves of their relationship so he devices a plan to break them up by betrothing Prae Pim to Phitnu (Sathaporn). Because they want to be together, Prae Pim and Phet run off together to Hua Hin.

One day in Hua Hin, they went to a temple festival and they got into an argument. Phet distanced himself from Prae Pim and went under an arch of fortune teller and meets Jao Por Sai Ngaam (Kroo Meud), an guardian spirit. He sees that Phet will meet a critical fate soon, so he uses his supernatural powers to send Phet to the year 2554 (2011) to show Phet his future.

Phet has crossed 19 years to the future and sees Prae Pim (Nok Sinjai) again, who is now 43 years old with a teenage daughter named Mai (Grand). At first, Phet believes that Mai is his daughter and is overjoyed. When he learns that Prae Pim is married to Phitnu, he is devastated. One, Mai might not be his daughter. Two, the woman he loves is married to someone else. It sucks. Disappointed, he goes back to his old house from the past which terrifies everyone there. because they believed they saw a ghost. Eventually, Phet learns that he died that night at the festival. He does know how but he died. Wanting to learn more, Phet decides to stay in the future to investigate how he died.

Phet tries to get close to Prae Pim by changing his name and applying to be a teacher at her musical school. She was there, so she might know how he died. The more he sees of her, the more he learns about her life which is not great at all. Prae Pim does not have a happy life, her husband Phitnu has a mistress named Weepawan (May). Her life is in shambles and she doesn’t smile as much as before. As he attempts to bring joy back into her life, Jao Por Sai Ngaam reminds him it is time to come back to the past.

Kham waela tamha ruk took place in 1982. It's a story of a man named Peth, a singer at a night club who dreamed of becoming a famous singer. Phet had a girl friend named Phraepim who was there for him, giving him encouragement.

Phraepim's father did not like Phet and arranged for an engagement between Phraepim and Phit. Pim and Phet ran away together. One day Pim and Phet went to a festival at a temple. They had an argument. Phet walked away from Pim and went to talk to a fortune teller. Phet met with a powerful spiritual man, Sai-ngam as in a name of a spirit guarding an ancient tree. The guardian spirit knew that something bad was about to happen to Phet. The spirit then used its power and sent Phet to the year 2011 so that Phet could see the future.

Phet was sent 19 years into the future. He met Pim again at the age of 43. Pim had a daughter named, MeuanMai (Grand). Phet was so happy and thought MeuanMai was his daughter. Phet later found out that Pim married to Phit. Phet was devastated. He came back to his old house (the house that he used to live 19 years ago). Everyone at the house was scared and thought he was a ghost. Phet then found out that he died the night of the festival. Phet decided to live his life in the present time. He wanted to find out the reason of his death.

Phet would find ways to get closer to Pim. He applied for a position at Pim's music school. He changed his name to Pat. Phet met Guy, a self center rich kid and Khit (Tono), a kid at a coshop who loved to sing, Pin (Namtan) who was very ambitious and wanted to become famous. Phet also met with Obe-Sroun (Radkrao) and Tor (Anuchyd), who are very close to Pim and have helped Pim all these years. Phet found out that Pim's family life was not as happy as it seemed because Phit (Pim's husband) had a mistress, Wan. Phet wanted to see a smile on Pim's face again like in the past. At the same time, the spirit sent warning to Phet that it was time for him to go back to his past life...

Peth (Bie), a singer at a night club who dreamed of becoming a famous singer. Peth had a girl friend named Phraepim. Phraepim was always there for Peth, giving him encouragement, etc... Phraepim's father, Atichart (KriengKrai) was not impressed with Peth. In Athichart's view, Peth didn't have a future. Atichart secretly arranged an engagement between Pim and Pitsanu (Sthaporn), a son of Plakorn (Suchao). Atichart forced Pim to brake away from Peth. Peth and Pim would not allow Atichart to pull them apart. They decided to run away together to Hua Hin (a small town).

One night, Peth took Pim to a festival at a temple. They got into an argument. Peth walked away from Pim and went to fortune tellers' arch. Peth met with Jao Por Sai-ngam, a powerful spirit stationed at an ancient tree that Peth often prayed to since he was young. Jao Por Sai-Ngam knew that dark fate was about to befall on Peth. Out of compassion, Jao Por used its power and sent Peth to the year of 2011... so Peth could see the future with his own eyes.

Peth was sent 19 years into the future. The first image that Peth met, was a picture of Pim (Nok Sinjai) when she was 43 with Mai (Grand) her daughter... Peth was so happy and thought that Mai was a daughter from him and Pim. When Pet found out that Pim was actually married to Pit, Peth was devastated. The image of the future was what he was hoping it to be... Peth decided to go back to his old house. The house was locked up and left unattended. His grandmother (SomSai) went to live at the senior housing. When some of Peth's old neighbors spotted Peth, they started to run away from him like they were seeing a ghost. Peth was quite puzzled. Peth didn't understand what was happening and what had happened to him... Finally, Peth found out why people were scared of him. Peth found out that he had died the night of the festival. Peth decided to live in the future period, so he could search for the reason of his death. He also wanted to correct mistakes from the past so that he and Pim could be together in the future period.

Peth would find ways to be closed to Pim. He applied for a music teacher position at Pim's music school. Peth went by the named of Pat. The first time that Pim heard Peth's voice and saw his face, she could not believe her eyes that someone could have the exact same feature as Peth, someone whom she loved. The old feelings, the tenderness inside Pim's heart resurfaced... Pim did not want to hire Pat but Obe-Aroon (Radkrao), Pim's best friend who was also a music teacher at the school talked Pim into hiring Pat. Finally, Pat was given a job at Pim's music school.

Pat met with Tor (Anuchyd), Pim's relative. In the past, Tor always extended his hands to help Pim and Peth. At the music school, Pat met Guy (A, Narin), Khit (Tono) and Pin (Namtan)... Guy, a self center kid from a rich family... Khit, a poor kid who worked at a coffee shop but loved to sing... Pin who had high aspiration of becoming famous. Pin would do anything to get there. Both Guy and Khit were so taken with Mai. Pat had to always smooth the situation between Guy and Khit. At the same time, Pat tried to find out about the past from Pim... Peth realized that Pim's family life was not a happy one. Pim's husband had a mistress named Wepawan (Mae). Every time, Pim was sad or unhappy... Pat would try to get her to smile like in the past. Because of the closeness and friendship between Pim and Pat, Mai was becoming very suspicious and started to believe that Pim and Pat were having an affair. Mai began to have severe problems with her mom. While Pat was about to discover the reason of his death, the spirit Jao Phor Sai-Ngam came to remind him that it was time for him to go back to the past. If Pat refused to go back, the situation would get worst...

What would be Pat's decision? How is Karm waela tarmha Ruk going to end?