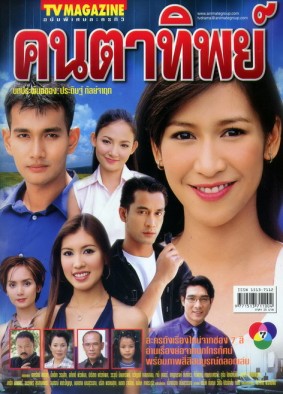 Naree (Pok) is a PE (gym) teacher at a school who wants to be a police. Her mother and little sister, Nongklang owns a flower shop. Ek (aka Prida) is a doctor (I think he’s an eye doctor). Their first meeting was at her mother’s flower shop after Na had lost the Taekwondo competition. Their first meeting was in the flower shop where he caught her from falling down from leaning against the door that he just opened. It was love at first sight for Ek, but Na (Pok) doesn’t think the same. In the car, his mother asked him about the two sisters. "The elder sister is pretty but has a boyish attitude." She likes the younger sister because the younger sister is gentle and more lady-like unlike her older sister. Ek on the other hand said he prefer women who are strong which is better than weak women...

An incident later happened at the school where Pok work. Bad guys went on school property and the was an explosion in which Na's (Pok) eyes were damaged which led her to be blind, but thank goodness the bad guys died. But what happened was the doctor took out the eyes of one of the dead guy and exchange it with hers so that she won't be blind. As doctor and patient, Prida (Ek) and Na (Pok) were closer. Not long after getting her new eyes, Na(Pok) began to see things. She has a 6th sense in which she was able to see spirits. Not only was she able to see spirits, she was able to witness killers and their victims like she was there in the scene. This is what they call premonition. Naree can see what's going to happen in the future involving a killer and its' victim. She was a great help in the police department which her dream was to become a police officer. But the owner of the eyes came to haunt her. He was the one who wanted Na(Pok) to see all those scenes...

As Mor(Ek) and Na(Pok) got closer to each other, love began to start...