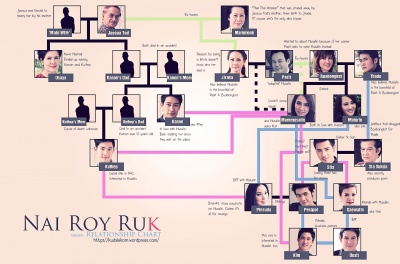 After giving birth to Maanmuslin, the mother wanted to take revenge. She didn't want the father to know they had a child, so the mother give Maanmuslin to her boyfriend to raise and told him not to tell anyone. The mother's boyfriend promised even though he's married to another girl which became step-mother to Maanmuslin and he didn't tell her. It made the step-mother misunderstood, it's from his ex-girlfriend and him. Maanmuslin didn't know that these two people are not her real parents and was hated by the step-mother. The step-mother didn't raised Maanmuslin that well but Maanmuslin never stopped loving her. She loves and take care of the mother who raised her since she was born. Sometimes, she suspect why her mother never give her the love like a mother does.

Her real mother did married her father as promised and they give birth to another daughter. Her real family is really rich. The mother never have good feeling for him and hated him for raping her.

Nang'ek is a person who fight for survival. Work in the entertainment industry. Modeling and act in lakorn. The author of this book based it off of Aum's character. She's a straightforward person. On the outside, she looks harsh but inside she's sensitive. Some of the events she have to wear revealing clothes but just thought of it as her job to make money to pay off the debt her step-mother made and taking care of her grandmother, name Maanmook. This grandmother is not her real grandmother too. Maanmuslin doesn't know either. Grandmother Maanmook has a tie to pra'ek's grandfather.... she's his second wife. However, pra'ek's grandfather kick grandma Maanmook out of the house thinking she commited adultery. Pra'ek's grandfather is really rich, he's a "jao sua". She was pregnant with nang'ek's step-mother but the grandfather didn't know.

Pra'ek's name is Kanon or his nickname Blow. He's handsome, gentle and thoughtful. He has a nephew around his age name Kungthep, who is a friend of Maanmuslin when he studied in America. He liked Maanmuslin but she only thought of him as a friend. It made Kungthep's ex-girlfriend angry and hated Maanmuslin because she thought Maanmuslin is the reason he broke up with her. Which this problem went to tied with Mister Kim. She's also the reason why a lot of things happen to Muslin's friend and Mister Kim and herself.

Kanon only heard of her name and her bad reputation for dressing revealing and stealing friend's boyfriend. He changed his mind when he met her though Kungthep's introduction. Muslin is a straightforward person. She does everything if it doesn't trouble anyone. She doesn't care of others gossiping because all she thinks is she's working. She loves her friend and can fight for them. He falls in love with her unconsciously even though he was studying her real sister. Looks like heaven is playing a joke because grandma Maanmook is his grandfather's wife so it makes them related. (credit: shampoo@SpicyForum)