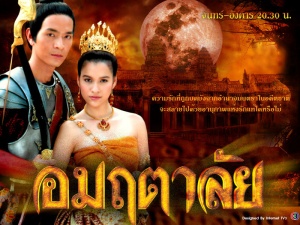 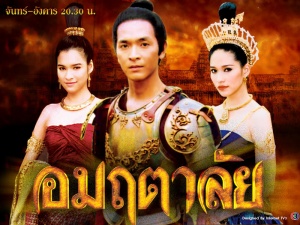 "Amaraetalai" is about past lovers reuniting in the present time.

Tatape (Paul) is a cop investigating mysterious, unexplainable murders, and disappearances happening to the men in his city. Meanwhile, being strangely connected to a woman behind the user name Lotus because they have been sharing their opinions about books they've read in a forum online.

One day,Tatape wants to meet Lotus so they arranged a time to meet. But to be careful, Bua (Yardthip), who went under the username Lotus, asks her friend to take her place while she sits at a distance to see Tat. Being disappointed that he didn't get to meet her, he leaves his card with her friend. Later he follows Bua into a bookstore, because he wanted to see how she looks like. That night, she calls him and they begin to build a friendship.

Tat also comes from a high class family. His mother attends a lot of Hi-so events and forced him to go to during his free time. One day, he ends up going to a party the same time Pentoowadee (Ploy) decides to let Bua get out and socialize. This was the only way she can run into her lover faster.

When Tat and Bua officially meets, they were drawn to each other because of a mysterious conncection to their past life. But when Tat meets Pentoowadee, he became confused, because when he sees her, he is strangely drawn to her as well. Even though he knows that he was insterested in Bua, he was somewhat attracted to Pentoowadee.

Pentoowadee is a Khmer princess who sought refuge in Thailand. She appears to look young but is actually much older than she looks. She killed Bua's father and separated Bua from her brother by kidnapping her. Even though it seems like Bua was working for Pentoowadee, it was actually Bua leading her to her lover from years ago.

Some investigations of demonic creature taking hearts out of young men and the disapperance of Tat's friends started to occur, which led Tat to build a relationship with Pentoowadee and Bua. But only Pentoowadee has no idea about Tat and Bua's relationship.

There were flashes of Tatape as a Koopetra knight, who is drawn to the Princess Pentongtavy's (Pentowadee) beauty. One of the flashes reveals Koopetra's first meeting with Yosowtoria (Bua), who he mistakes as a servant and later learns that she is also a Princess. Due to Pentoowadee's witchcraft, both Tat and Bua only dream about their past lives the way she remembers it. There would be times Tat dreams of being in love with Pentongtavy, but wakes up knowing that he's already fallen for Bua.

He was really confused about his dreams and the reality. In order to find out about his past life, he visted a doctor to have him hypnotized. Since then, he begins to learn more about who Pentoowadee really is.

The king orders Pentongtavy to go to a distant land to create a new kingdom for him, which he names Amaraetalai and have her be the queen of that land. During her time away, Koopetra spends time with Yosowtoria, and they both fall for each other without knowing it.

A year later, Pentongtavy returned and Koopetra was excited to to see her. But he was later torned between his feelings for her and Yosowtoria when he noticed that power is more important to Pengtongtavy than anything.

So his mother gave him a family heirloom to test and see if he is meant to be with Pentongtavy or not. He takes the item and other gold and jewelry to Pentongtavy, and told her that they are gifts for all the princesses. Pentongtavy picks up the item and examines it, but puts it down and takes a big, gold necklace instead. All the other princesses take what they wanted, and the only thing left is the item that his mother gave him.

Koopetra disappointingly held the item, but Yosowtoria saw it and snatched it from him because she liked it. She shows it off to her sister as something beautiful, but Pentongtavy only sees it as something ordinary.

Later, Pentongtavy became so drunk with power that she wanted to take over her father's kingdom. Koopetra can't believe that the woman he loved had changed so drastically. The King became angry and ordered Koopetra to marry Yosowtoria. Pentongtavy thought that her sister betrayed her and became more evil than before.

Yosowtoria was aware that Koopetra is in love with her sister. Even after their marriage, she noticed that Kooptra still loves her sister. But she continued to stay happy anyway because she understood that she had a part of his heart. Upon hearing this, Koopetra promises to spend the rest of his life taking care of and protecting her.

The King then ordered Koopetra to go to Amaraetalai to try to talk to Pentongtavy and reason her to stop trying to take over his kingdom. The King also said that if she refuses, then Koopetra is to kill her, and destroy Amaraetalai. Yosowtoria decided to go along with Koopetra, hoping she could talk some sense into her sister. But when they arrived and tried to reason, no one can say anything to change her mind.

Pentongtavi even tried to find a way to get Koopetra to kill his wife, but Yosowtoria found out about it. She suggested to kill herself if Pentongtavy promises not let any harm come to Koopetra or else Amaraetalai will crumble. Pentongtavy agreed to her idea.

Right when Yosowtoria is poisoned, Koopetra comes in to see her before she died. She told him that half of his heart that belongs to her means the world to her. Then, Koopetra apologized for not protecting her like he promised.

After Yosowtoria dies, Koopetra tried to get Pentongtavy to kill him, but she refuses. She told him that she still wants to be with him. Then he hold her that in his life, his heart was torn in two, but now his whole heart belonged only to Yosowtoria. He uses the same poison that killed Yosowtoria to poison himself. Before he died, he made a promise to Yosowtoria that no matter what world, or what life they live in, he wanted to share it with her only.

After Tatape learned about Pentoowadee, everyone found out that Pentoowadee is not only a Princess, but a thousand year old witch. They found stone tablets with a spell on how to defeat her, but get one of them stolen by the bad guys. So they used the remaining tablets to get rid of Pentoowadee. Then they celebrated Tat and Bua's engagement until Bua passed out from the poison Bua's mother unknowingly gave her.

In the end, they killed the witch, but no one was celebrating. Instead, everyone was sad because Bua was dying. Tat held her in his arms on her death bed while she confessed her love to him before her last breath.