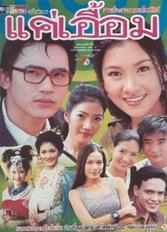 Saiban father was unfaithful to her mother. So her mother was heart broken until she died. Her grandfather buried her mother on a hill near their house. So whenever Saiban missed her mother she could go and talk to her mother there. So from then on she lives with her grandparents. They own a lot of land. they also owned a mushroom plantation. Her father also remarried and has a step-son that he wants to hook-up with Saiban because he knows that when her grandparents die they will give everything they have to Saiban.

Nopepamai was a very intelligent person he goes to school all over the world on a scholarship from the country. his major was in mushroom. He knows everything any man could know about mushrooms. So when he returned, he became a professor in a school in Chiang Mai [where Saiban and her grandparents live]. He was also introduced to Saiban's grandfather and so he also works in Saiban's family mushrooom plantation.

Nopepamai remembers all the times that he meets Saiban cause from the moment that he saw her he fell in love with her. Saiban on the other hand remembered no meeting that they had. When they see each other face to face again they don't get along cause they just begin to go at each other and they would make one another made at each other. She calls him mushroom doctor and tell her friends about him all the time. She tries to stay away from him but her grandfather wants her to learn everything that she can from him so that she can run the business once it was hers. So this causes them to get closer. Then rumors began to start spreading about them.

There were a group of people that were enemies with the mushroom plantation and they wanted to buy the land that was owned by Saiban's grandfather, but he refused to sell his land and they started to sabotage the plantation, Nopepamai, and Saiban. As time passed the started to see past each others hearts and fell in love but were stubborn to tell each other how they felt. After a few more occurrences he finally asked her to marry him and she agrees. They finally did get married.

The final shot was Saiban, Nopepamai, and their four year old daughter going to Saiban's mother grave to talk to her and to put a rose on her tombstone

In the book, the neg'ek Saiparn is a smart confidence working woman but in the lakorn she portray as a rather childish and self-fish character.