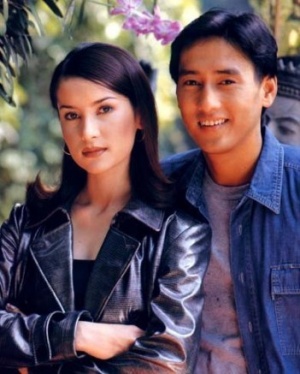 Saksit is a gardener and he works in Ann's hotel as the gardener in her family's hotel garden. When they first meet she doesn't like him. She tries to fire him on many occasions but he is always saved by someone. Soon her father dies and the person that murdered her father also wants her dead. So they go after her in the hospital. Saksit somehow overheard their plans and goes to the hospital and saves her. They run off in the car and is chased by the bad guys.

She blames him through the whole thing and he wonders why he felt the need to save a girl that had a bad mouth and bullshit on everyone. They had no place to turn and had to hide from the bad guys so he takes her to his house in the woods. In a secluded area from civilization. She has never lived like this and she once again bad mouths Saksit. Since she is now at his house he doesn't take it. But he is always careful to treat her as a guest and as a upper class person and not as someone in the same level in society as he is. They spend more time together and he begins to fall in love with her but he keeps it to himself. She also develops feeling for him but she also keeps it inside and never shows much feelings for him. She also wants revenge on the people that did this to her and her father. She stays in Saksit house for awhile and then when she was better she returned to the city and started to search for her father's killer. She was also engaged to be married.

Saksit also returned to his job as the gardener. This time around Ann and Saksit don't hate each other as much. She would come by to talk to him. He was always there to help her with her problems. One day she finally succeeded in finding the killers and they were after her once again but Saksit is there to save her. I think that they took her to this land area were there wasn't anyone around and they were about to shoot her when Saksit came. She ran into his arms and he shot the killer.

Saksit was also informed about her engagement and was invited to her wedding. Which was coming up pretty soon. She didn't want to go through with it but she couldn't disappoint her fiance because he had always been in love with her. He was like a cousin to her cause their parents had known one another along time. They were also arranged to be married at a very young age. Saksit couldn't stand seeing her get married so he went to his house in the forest. It was getting closer and closer to her wedding. He decided that he would come to show his happiness towards her and her husband so he drove to see her. As she informed her fiance and he understood and he let her go to him.