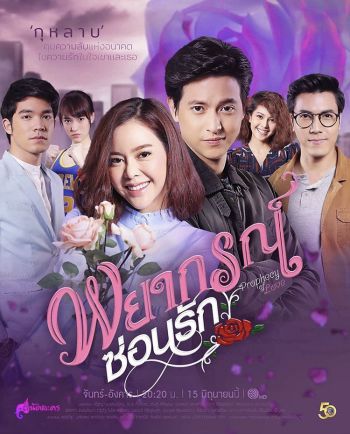 (Short Synopsis) Rosita (Ice) is a Thai-French girl who is unable to tolerate her french father. So, she returns with her mother from France to Thailand. She is saved by a mysterious old woman, to whom the girl receives a gift to clairvoyance. From then on, Rosita is obliged to help people, to predict their future and the extrasensory becomes her hobby. Theerut (James) is a famous celebrity and the worst enemy of Rosita, to whom she predicted the pregnancy of a lover before marriage (Cr: Mydramalist.com)

(Long Synopsis) Rosita (Ice) gets into a car accident and suddenly gets a talent where she sees the future when she touches a rose. She becomes a famous fortune teller. One day, she makes a prediction in public to reporters that Theerut (James), a famous actor, will make a woman pregnant and have a secret child. That prediction gets Theerut into trouble and their relationship becomes antagonistic from that day. A few years later, there is a charity event and the host invites Theerut and four celebrities as special guests, and also invites Rosita to tell their fortunes. Five celebrities choose different roses and give them to her to read. Once Rosita touches those roses, she sees sweet scenes of Theerut and herself hugging, kissing and loving each other very much. She is so shocked. Her reaction is so strange and the five celebrities are very curious about what she saw. Rosita does not tell anyone and claims that she saw nothing. But all the guests do not believe her. After that day, something strange happens to her. She is attacked by someone and the suspect is one of the five celebrities whose fortunes she had read. The biggest suspect is Theerut who had always been her opponent. But one day, he coincidentally saves her from the criminal and also offers to let her live with him as it is the safest place for her since everyone thinks that they are opponents. Their relationship improves little by little from that day through many dangerous situations to find the real criminal who wants to kill Rosita. (Source: James's Fansub english translator)