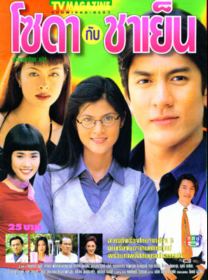 Atom is a successful 23 year old chemistry genius who already has a PhD! She is a professor at a university and her parents expect her to have a boyfriend who also has a PhD. When her parents want her to marry a nerdy engineer, Khun Chansamorn (Tik Shiro), Atom tries to get out of it by blurting out that she already has a boyfriend.

Pattaya is a young playboy who lives a carefree life surrounded by beautiful women. However, when his girlfriend embarassingly dumps him, he needs to find a new girlfriend as so his mother won't lose face in her hi-so group of friends.

Desperate to quickly find a significant other, Atom and Pattaya turn to Gin Tong Baiyok, a dating service that matches people together. They secretly apply and are unexpectantly paired together. They are extremely unhappy, but have to work together to please their parents - but each have to completely makeover their persona to match the other's family's expectations. Atom turns into a sexy, fashionable girl named Amy, and Pattaya turns into a PhD genius named Pattana. The two work together to make their scheme successful and end up falling for the real person they each are rather than the fake persona that they had to pretend to be.