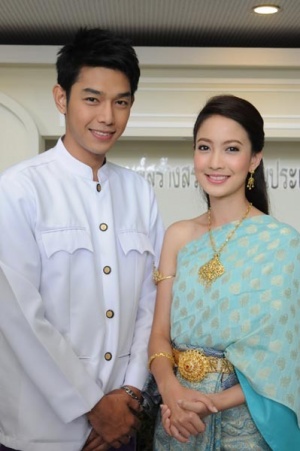 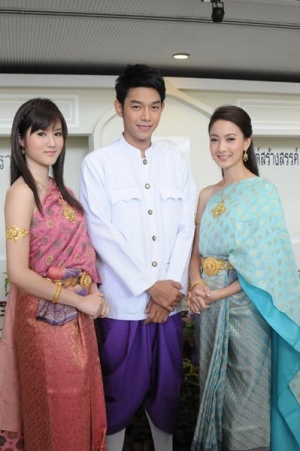 Art in the lakorn is New, a college student, who wants to have a good time, he tells his friends Jack/Pang and Dao he wants to go somewhere during the Songkran holiday. Pang contacts his uncle Wiwat from the provinces to see if they can go there to celebrate Songkran, his uncle agrees if the guys come before the Songkran festival and help the townspeople prepare for the celebration. Pang agrees. When they get there, Wiwat realizes that they are too into the fun of the Songkran festival to care about working. He decides to delegate the task of handling the guys to Nam (Taew), a beautiful straightforward girl with confidence and Wiwat’s niece.

When Art meets Nam, he is intrigue. His friend Jack notices that and made a bet with him, if New is able to get with Nam, Jack will buy him 3 meals. Just 3 free meals, you cheap, man. New agrees and starts to pursue Nam and finds it strange that her only means of transportation is a bike. She refuses to ride a car or any automobiles. One day, New needed to go somewhere and he wanted Nam to come along too. But Nam refuses. Not taking her refusal, he tried to force her into the car and she started to scream. He was startled and later learned that Nam has a phobia of cars. When she was young, she was in a car accident with her parents. The car flipped over, she survived, but her parents did not. Since then, she has always had a fear of driving, of being in a car for very long. Though she is a smart girl, her phobia has made her unable to leave the town. New apologized to Nam for not knowing about her phobia. Nam tells New that every year, during Songkran she would invite the monks over to her parents tomb (urn) and asked them to do the Suat Bangsukula ritual (the practice of giving robes or cloth (white, orange) to monks at a funeral. New robes are placed on a coffin and received by the monks who then chant and pour water for the deceased in order to transfer merit). She does this every year as a way to show her parents gratitude and to tell them not to be worried about her.

After learning about her tragic past, New pities Nam and likes her more. He no longer cares about the bet he has with Jack. He begins to do things for her, like cleaning her parents’ tomb area. Kwan, some local guy who likes Nam sees him being nice and begins to feel jealous. He starts drama. When Pang learns that Kwan and New are fighting over Nam, he scolds New. Pang accused New of not being sincere and Nam was only a bet to him. New should back off. Just when Pang said that, Nam heard it.