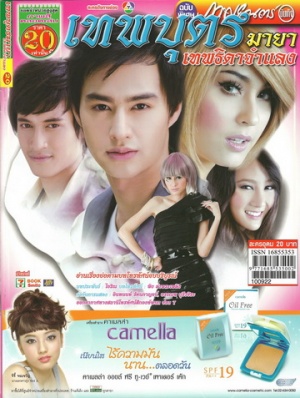 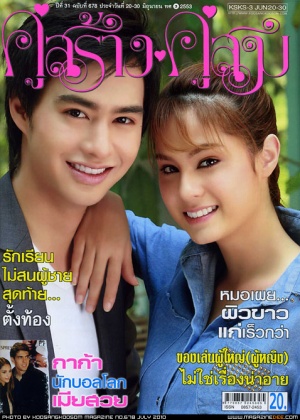 Tawin will represent the god of deception and Kwan will be the goddess of disguises. Tawin’s character is Rawin, a playboy, a guy who has a lot of ‘girlfriends’ or a guy who deceives a lot of women. Kwan is a girl who disguises herself into several characters to test him– to see if he loves her truly because they are getting married.

The book follows a handsome young man who is feed up with all the crazy girls chasing after him, so he looks for ways to get rid of them but nothing works. He decides to invite one of the gods to come down and help him.

Ramin. A very handsome Guy who every girl wants. He is also very rich because of the money from his parents. His parents has also passed away. He only has Mae Kaew and his stepmother who is his real aunt. Ramin is a playboy and he likes to spend his days with alot of pretty girls. Ramin's deals with all the girls are that they date and see eachother like they want to but they do not get into eachother's business. The latest girl that Ramin is messing around with the Acharawadee. Acharawadee is a model and a actress who is very pretty and sexy who is also wanting to trap Ramin.

One day Ramin found out from mae Kaew that his dad Ramayte has agreed to have Ramin get engage with his best friend s daughter before he has passes away. The news drove Ramin Crazy. The girl he is suppose to get engaged with is Mat Mai or Pakramai. He has not seen her since they were little. But he still remembers how horrible she was. She use to prank him all the time to the point where he hates her. He even gave her the nickname Kid from hell. Ramin likes pretty girls but Pakaramai is not pretty and she also wears very thick glasses. Ramin was mad and told Mae Kaew that he will never marry her. Mae Kaew than told him that he has to marry her within 3 months of finding out the deal and he has to be married to her for at least a year. If it does not last a year he has to give all his money to Matmai. Ramin that made a promise that he will never do id.

Ramin went to go see Matmai and the first girl he saw was the most beautiful he has ever seen in his life. her name was Matmai. But the girl told him that her name is matmai but she is not matmai his fiance she is her servent. Ramin noticed that her skin and her clothing was pretty and she had expensive stuff so she could not be a servent but for some reason he believed her. this girl was mean and not nice. The Girl was really matmai but ramin does not know that. Matmai than told her servent Dtim ab