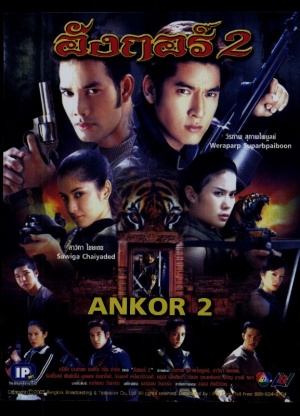 "I watched Angor2 this last week. The storyline is pretty good. In Angor1, the evil spirit was not killed but captured in the waterfall cave with the knife of love. In Angor2, there were some money and spiritual power hungry geologist wants to get their hands on the knife and its powercamping the cave ready to grab the knife when it is reveal. Another scene in a boran time...and city....involve an evil man who is aware of the power of the knife...he invaded the city killed many soldiers...and is making his ways into the kingdom to destroy the royal family...The Queen has a little daughter....Princess Ada..Everyone was warned about the invasion and was recommended they leave to a safer place...the King and queen chose to remain and fight...The King's trusted officer and his family (wife and two children) was to take the Princess to a safe place....traveling through time...before they left,,, the King gave the Princess a powerful eyecharm...with will led them out....also, the queen gave the boy a necklace to wear...in which she told him to give to the princess when she grows up. To make the story short, they travel thru time and got over the other side of the world...which is today's time...still in the same cave...but they were followed by the evil man...and they got separate during a fight....the officials' wife took her two children and raise them...however the princess was rescued by an English Geologist's wife...but before they escaped...the evil spirit of the lion was unleashed and went into the Princess's body... ....She grows up to be a very strong person, working in the policy force, Now the fun begins...Vee and his sister and mom must find the Princess and begin the journey back to the mountain of the fall cave to look for the knife of love before her 21st birthday or she will turn into a tiger forever!