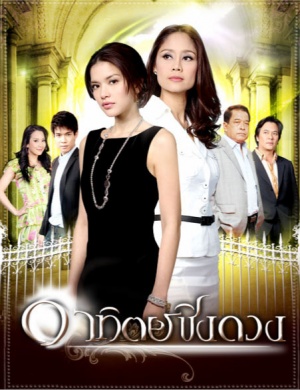 Nok Sinjai takes on the role of Phanrawee, a woman trying to maintain her station in life. She is married to the wealthy Rangsee Soriyathit played by Pisan Akarasene (Aom’s biological father in real life and in this lakorn).

Rangsee and Phanrawee have no biological children together, they do have one adopted son Passakorn (Nat Tephassadin). Rangsee does have one biological child with another woman, Rangrong played by Aom Piyada. Rangsee did not know of her existence until she was grown. Rangrong is a feisty young woman out for revenge on Phanrawee the woman who harmed her mother and to claim what’s hers, which is Rangsee’s inheritance.

Just to add some more to the above, Rangrong ended up not really being the biological daughter of Rangsee. What happened in the parents' younger years, Phanrawee did not want anyone to take Rangsee away from her because she really loved him. Rangsee fell for this women that played a traditional Thai musical instrument at an occasion he attended. Rangsee ends up getting her pregnant. Rangsee and Phanrawee got married but this other woman was still in the picture making Phanrawee mad. Phanrawee takes this woman to an abortion center. Every viewer is suppose to think that this woman refused to get an abortion and the child ended up being Rangrong. That is wrong. The other woman really did have an abortion. She (which is really played by Fang to make it easier to understand later on) used her talent to play near the temples when one day another woman shows up in the picture with her young newborn. Fang snatches that child, which is really Rangrong. So, the lakorn goes on with Rangrong being the victim until DNA proves that she is really not a member of Rangsee's family. So, Rangrong turns into the n'rai in the lakorn, which made it a really out-of-the-ordinary lakorn. Rangrong makes a fake will forcing Rangsee to sign everything to her. After he signs, she then kills him. Phanrawee does all that she can to take care of Rangrong but they were just equally tough. The bad that Phanrawee had done in her past came back to her and now she is faced with Rangrong, who was taught by Fang to get revenge for her and to take over everything that really belongs to them. Rangrong had a hard time believing it too that she was not Fang's child but still went on with her evil life since she had nothing to lose anymore. Rangrong's real mother ended up crazy the day her newborn was snatched from her. So, Phanrawee came in the contact with this woman by accident and does all that she can to determine if Rangrong was hers. Phanrawee almost succeeds until Rangrong killed her own mother by dropping her in the water. Rangrong does all this horrible things making Phanrawee become the victim. In the end, Rangrong commits suicide to wash away the sins she created after she was caught. Phanrawee ends the lakorn by making a statement about doing good and good will come but if you do bad then bad will come.