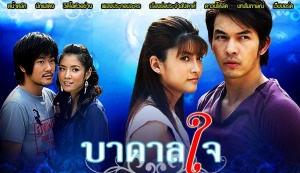 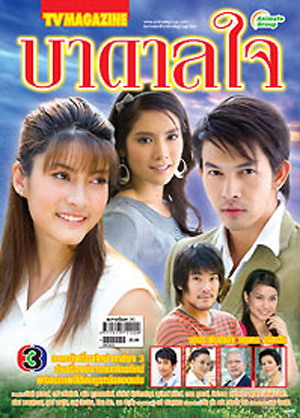 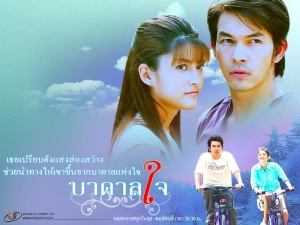 Badarn Jai is a lakorn about a man who mentally falls apart because the love of his life committed suicide. The night she jumped off the building, she landed on the windshield of his car. Devasted, Aum plays the demented man and Margie plays the young woman who helps him regain his sanity by showering him with love and support.

At the start of Badarn Jai, our pra’ek Sakkarn dons the asian mullet, isolates himself from the world, and scares his family with his erratic behaviors. Sakkarn is heartbroken and deeply depressed over the death of his fiancee, Aeuy. His mother is deeply worried and asked advice from a longtime friend who has a daughter.

Seeing that the only way to heal her son’s sorrowful state is to find him a new love, she arranges a marriage between Sakkarn and her friend’s daughter, Purimarn. In order to coerce her son into marriage, Sakkarn fakes an illness.

The couple marry. They move into Sakkarn’s house and sleep in different rooms. Purimarn works really hard to please Sakkarn. She tries to brighten up his life by adding flowers into his home and being really lively. He likes her company but pretends to hate her.

After the death of her sister Aeuy, she saw an opportunity to be with Sakkarn. Ransitha starts mingling into Sakkarn and Purimarn’s life in order to break them up.