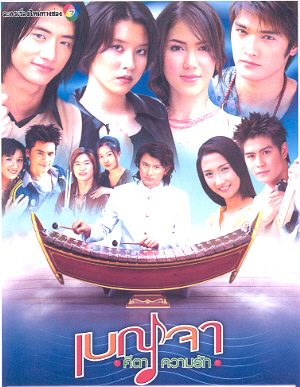 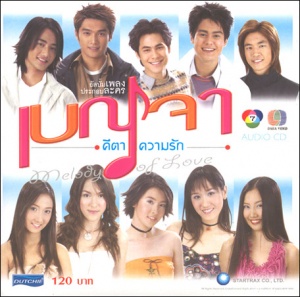 1st praegg: Wayu (Big Puchisa) he's a normal guy that like to blow on his flute most of the time

2nd: Sarmpope (Nam) he is the guy who likes to be perfect and clean all the time.. he likes to wear white shirts..

4rth: Poopah (Au Nawapol)the nature guy... he hates anything that has to do w/ technology

2nd: Yo(Jieb) she's the imperfect girl.. always so clumsy and all.. get into trouble most of the time...

5th: Lumduan(Roong) she's shy and doesn't talk much in the movie.. just follows most of the nanegg around..

main badgirls:known as the Pop Girls in the movie.. 1st: Fierce(Tangmo) likes Wayu

minor ones: all the nanegg's teacher (forgot his name) kaew's father.. he has a coffin shop.. Fierce's father the teacher's ex-g/f (forgot her name also)

1st encounter of each couple so I dont have to go back and forth:

1st nanegg/praegg: arguing after the nanegg (bua, yo and kaew) got in trouble for ruining the talent show.. he gave them a zero.. 2nd: when Yo trips and split paint on sarmpope's shirt..he got mad at her.. 3rd: already friends.. knows each other already in the movie 4rth: while nanegg sings on stage w/ kaew and Yo 5th: after seechone finish singing and he went outside w/ his girls and threw a soda can at lumduan's head accidentally..

now off with the summary:

The movie starts off when Kaew's father was praying on the streets.(spiritual stuffs)The bad guys come over and told him to go home, he has been praying for 3 days already... He wouldnt go so they messed up all his things and he try to wet them w/ water. They were fighting and while in the coffin shop one the guy called for Kaew and told her to go help her dad. She got out of the coffin(looks scary when they showed her) and went to help her dad on the streets.. she kicked all the badguys asses and they ran away.. they went home and Kaew was supposed to go to college.. She always wears black and put on dark makeup. She meets all the nanegg while going to college.

The college is more like a music school majors... Kaew first met up w/ Yo(clumsy girl) and Bua (computer girl). They decide to go sing on stage and sign up for it after they saw all the praegg sings on stage together.. But which eventually they ruined it because Bua can't stand loud noises and she faint right on stage and Yo accidentally threw the drum stacks at Sarmpope. HE got mad and yelled at them. All the praegg went upstage and gave them zero's. Kaew got mad and argue w/ Wayu cuz he was the one that gave them the zero's... the praegg walk away and Kaew follows trying to talk some sense into Wayu. Nothing happen just that he blew his flute for her to tease her...

Later the nanegg were trying to get the papers from the pop girls so they can sing like them.. the three main one that wanted was Kaew, Yo, and Bua.. They like rock music but actually Kaew's father wanted her to take old tradition songs/music but she refuse to take it.(that part i will tell later)The students get to stay in the dorms at school so they stays at school.. That night, Kaew wanted go explore the guys side of the dorms and she asked all other naneggs to go w/ her.. excpt Shoongnaan cuz she's the oldest and a senior in college and they were only freshmen in college so she wouldn't allow them to do that and plus she doesn't sleep w/ the other four naneggs. So the four nanegg left their dorms and went to the guys side. Kaew is a brave girl so she's not scared of anything but the rest they were scared so she took them to a dark class room and didn't turn on the lights so someone grabbed Kaew shoulder and the other nanegg got scared and they all ran off... Kaew was left behind and she was trying to fight the one that did that to them.. but it turns out to be Wayu when he turn on his flash light..He was mad cuz Kaew socked him on the face and kicked him.. (Going to the other naneggs) Lumduan went into Seechones room and hide on the bed.. he came back to the room and thought that is was his room mate that is on his bed so he was sweet talking and jumped right on top of her... she kinda of screams and he got scared and pop up, it was the nanegg.

About Yo and Bua they went into the bathroom just different directions, while Sarmpope and Poopah was still taking baths.. Sarmpope got out naked trying to get his towel then Yo saw him and started screaming and Sarmpope doved back in the shower stall cuz she saw his nakedness. Poopah was wondering what happen so he try to get out, but Bua wasn't looking where she is running and also saw him naked and started screaming, he went back in the shower stall...Sarmpope try to get out again and Yo was still there and she screams again, so he ask her to give him his towel.. she blindfold herslef to go get it and and slips but he catched her but she got scared and ran off screaming towards Bua, back to poopah, he got out again naked and ask Bua to give him his towel, she did... Then both Poopah & Sarmpope was trying to come get the naneggs abut Sarmpope slips and fell and his towel got off so both naneggs saw him again and ran off screaming.. They woke up all the guys while screaming.. Then Wayu was carrying Kaew on his shoulder, while she's trying to kick him.. He brought her to the place where the other nanegg was taken to.. The guys was trying to plan what to do w/ the naneggs.. Saifah went to tell Shongnaan and she came.. They were having fun instead of trying to punish the girls like dancing in couples. But the Pop Girls got in and ruined their fun.. then everybody left.. Credit to lovely_jenny from asianfuse[1]