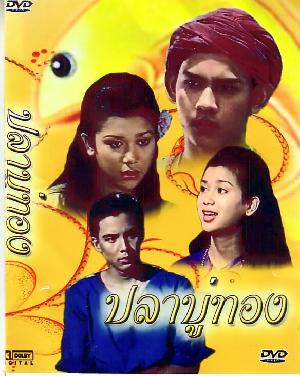 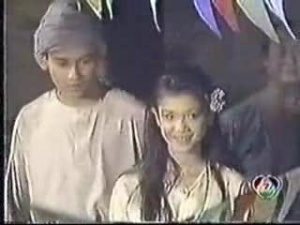 This is a lakorn based on a fairy tale of "Cinderella". Bla Boo Tong is based on a Cinderalla story. Bla boo means - "catfish". Tong means - "golden". The story is about the nang'ek (Auy) who her mother was killed by her father because of his mistress the 2nd wife, which she persuaded him and used witch craft or a spell on him to make him love her more than the 1st wife (nang'ek mother). Oh I forgot to explain one more thing the step-mother used witch craft to make her daughter look like nang'ek which makes them look like twins. So ok, Nang Auy was sad and wanted to find her mothers body, but her mean father and step mother kept her from doing that. Later a fish ate her mothers bones or ashes, which then made her mother spirit transform into a fish. Nang Auy discovered her mother was a fish and so everytime she would come to the lake to feed her mother. But soon the step mother finds out about Auy's mom turning into a fish, so the stepmother goes and tells Nang Ei to go somewhere and so she does. The stepmother tells her daughter to go and pretend to be nang Auy at the lake so that they could lure the fish (nang Auy's mother)towards them and cook it for food. Later on when she grew much older, she met the prince at a festival. They both fell in love and got married. But later on, her step sis and mother plot to kill her. They tried a couple of times but missed. Then one day they told her to come back home because her father was sick. When she came, they plotted to kill her again. They succeeded this time by burning her in hot boiled water. She died but the nature god helped her survived. Her mean step sis pretended to be her and used witch craft on the king/prince. Now that she is alive again, what do you think she will do?

credit goes to soysuva of viikii


Trivia or Interesting Info about this Lakorn