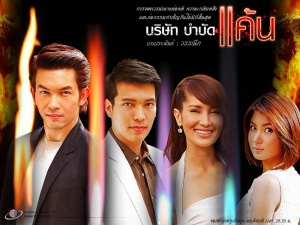 On her wedding day, Chanai (Ann) chased down Naree (Sobee) with a gun because she thought Naree was having an affair with Chakrit. Luckily, Taywan arrives in time to pick up Naree and their son. As he is driving away, he loses control of his car and cascades down a cliff. The car explodes at the bottom, leaving Naree and their son dead. Oddly, Taywan survives the crash with major injuries which included a burnt face.

As Taywan is receiving treatment for his mental issues at the hospital, Chanai also finds herself in that very same hospital for hallucinations. Chanai and Taywan find themselves in the same group and Taywan takes the opportunity to bully and torment Chanai with his hideous face.

Fearing Taywan would go too far with Chanai, Chok decides to check Taywan out of the hospital. However, this does not stop Taywan. On her second wedding ceremony to Chakrit, Taywan kidnaps Chanai and takes her to the site where his wife Naree and son died. They argue about the affair between Chakrit and Naree. Taywan does not believe his wife had an affair with Chakrit, Chanai tells him she has proof. She takes out her cellphone and shows him a clip of Chakrit and Naree “plotting love” with each other. I guess “plotting love” means they were planning to run away with each other. (?) That’s my guess. Out of the blue, Chok runs them over with his car. They both lose consciousness and the memory of that discussion disappears forever. Weird!

One year later, Jom (Aum Atichart) opens a spa near the hotel “Sirin” named “Spa Arak”, a relaxation center catering to the rich. Jom is a psychologist at the spa. At this point, Chakrit and Chanai are now married and are working at the “Sirin” hotel. Jom befriends Chanai and invites her to seek mental therapy at his spa. She takes his offer and even invites him to come work at the “Sirin” hotel to improve their hotel spa. He takes the offer because Jom is actually Taywan and he is here for revenge. I’m assuming at this point Taywan has had plastic surgery to correct his hideous facial scars.

Annon (Art Pasut), Chanai’s cousin has a weird feeling about Jom and his sister Waen who has come to work at the hotel.

As Jom begins to have therapy sessions with Chanai and listens to her problems, he rethinks his perception of her. He realizes that she is not an evil person like he previously thought. Her mental transformation occurred because she was drugged when she drank tea given to her by Pimpa and his two minions Detchat ( Yuan Nithichai) and Lawan (Junya). Pimpa wanted to take over the “Sirin” corporation and Chanai was in his way.

Jom accepts Salin and her son into the “Spa Arak” and sends out Rarerngchon to investigate Charkrit because Salin mentioned that the man in the clip was Chakrit. Chanai learns about it and decides to cut ties with Jom.

Chakrit decides to kill Rarerngchon and put the blame on Chanai. Instead of shooting Rarengchon, he shoots Salin and flees the scene, leaving Chanai in utter confusion and despair. Luckily, Jom and Waen witnessed Chakrit running away and found Chanai sitting in a pool of blood and holding a gun. Jom takes Chanai to Pearl Island to hideout.

There, he transforms himself back to Taywan, the hideous face guy. He torments her to help her remember the past. What the fudge? HAHA.

Eventually Chanai remembers the past…the phone clip, the reason why she became ill. Chakrit was cheating on her with Naree. Taywan is shock and she comforts him.

They stay together happily on the island until one of Chakrit’s minions finds them. Chanai is taken away and also receives a head injury. She forgets about Jom and their past together. That is so lame. Oy!

Chanai returns to Chakrit and becomes crazy again. Because everyone believes she is unstable, they decide to give everything– the hotel ownership, her wealth to Chakrit. But it turned out to be atrap to set up Chakrit and his mother to admit their mistakes. At the end Chakrit's mom shot her own sone believed that he will betrayed her someday and she ended up in a mental hospital.

Tawan still didn't want to confess to Chanai that he is Tawan even though CHanai already gave him a chance, so she decided to break up with him. Chanai thought it over the whole things again and realized that she couldn't let go Tawan the guy who truly loved her and who she's looking for all this time when Tawan wanted to sell off the spa, therefore she bought the spa under somebody else name and asked to meet Tawan in a person to surprised him and accepted his proposal. Together they run the spa and the hotel.