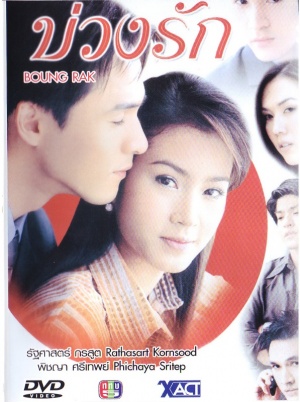 Puri's mom in this lakorn was the girlfriend of Pepper's dad. They were in love , but his dad didn't let him marry her. He trashed her seamstress shop and threatened her, so Puri's mom ran away and she was pregnant with Puri and never told Pepper's dad that she was pregnant. He tries to find her but she is nowhere to be found. Pepper's dad soon after is forced to marry another women and had Pepper and his evil sister. On the other side, Puri's mom married another man and had Fang.

Years later, Fang is hired at Pepper's company, but he fires her because she didn't her job correctly. When she was kicked out of the company, she begged Pepper's dad to give her another chance. When Pepper's dad looks at Fang's application, he notices that her mom is his EX. Knowing this, he helps Fang. With a misunderstanding, Pepper thinks that Fang is a gold digger, so he decides to torture her.....

Dad wants to get back with his true love. as he detest his wife and never had affection for her. Pepper is drawn to Fang but thinking she is a gold digger, he torture her. Puri get into a really hatefull mutual fight with Peppers evil sister and with Pepper for being mean to his beloved sister. Evil stepmom/Peppers mom tries to get back on everybody because she was never loved and mainly goes after Puri. framing him for a lot of stuff and planting evidence.