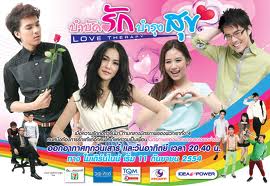 Poom (Beam) is a psychiatrist, he owns a clinic. Poom is looking for true love to further fulfill his happiness. Laila (Gybzy) is a beautiful girl who has relationship problems, she is constantly getting dumped by men and she doesn’t know why. Every time she gets dump, she seeks advice from Poom as his patient and friend. Unbeknowst  to Laila,  Poom secretly loves her. Pat (Bank: Black Vanilla) is Poom’s younger brother from another mother or you can say his half-brother. When Poom’s mother died, his father remarried and had Pat. Then, Pat’s mother died. Pat is a florist and owns a flower shop, he secretly has a crush on Kaew (Fang: FFK), who secretly is in love with his older brother Poom. A turning point in their intertwining  relationship occurs when Poom confesses to Laila that he likes her and  being that she is suspicious of all men she starts to distance herself from him. At the same time, Pat learns that the girl he loves is in love with his older brother.