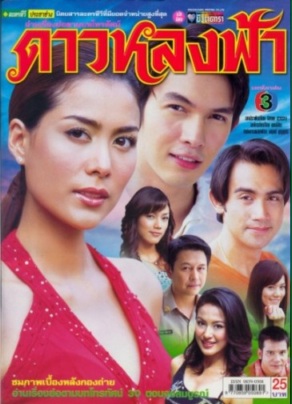 Dao Lhong Fah is basically a story about 'Namwan' (Cherry) who is a spoiled young girl from a rich family with a grandmother, mum and two aunts. She never received love or care from her father since she was young and her mother always tells her that her father was a bad man who left her mother to be with another wife. Namwa has always disliked her father. 'Domm'(Aum) is the grandson of the eldest lady who is a maid in the house, they are respected by Wan's family because they have been there for a very long time. Wan & Domm grew up together and she loves to trick and tease him, however he seems to always tease her back as well, both are strong headed towards each other. Once Wan graduated she entered the Entertainment Industry as her mother pleased and became a popular actress. She started to have a boyfriend and was forced to spend some time with her dad and step mum. However Wan would act very rude and disrespectful towards her very kind step mum because she believes from her mum that her step mum stole her father away from her mum. Which causes a hole in her family and lack of love from her dad. She encounter three wonderful family, they were lovely dovely family that Wan got jealous and wanted to test out that men are all the same, which was, when they find someone new they will leave their wife and kids. She started to date them and make them fall in love with her, giving them interest and hope that she liked him. However she was just playing them. While she is doing this she hurts their wife's feelings and the men's wife sometimes would come and fight with her over their husband but Wan will not stop until she is satisfied. One day she finally tells them the truth that she never loved or liked them men, which broke their hearts and a couple of them went back to their wife again. However one of the wife of the husband caused a scene at the filming set of one of Wan's movie and this causes Wan to be upset that she drove away fast with her mother and her two aunts. There she ended her two aunts lives and endanger her mother's life who later died. Namwan herself was in a serious condition and had a big scar on the side of her face, which causes Wan to be very sad and even sadder when she found out that she killed her aunts and mum. She comes back home hiding from everyone's face and public because of her ugly scar.

What will happen to Namwan? will she get her karma and sins that she did to her dad? step-mother, the three innocent families and her loving aunts & mother? What will happen between Domm & Namwan? Will Namwan ever get her beautiful face back again? Will Domm accept Namwan at her condition? Find out in Dao Lhong Fah.