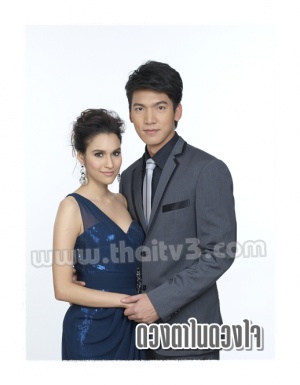 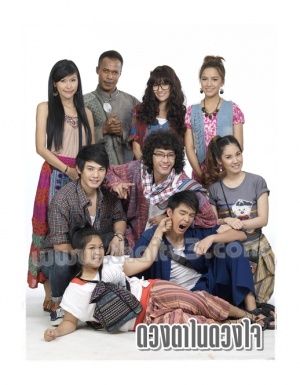 "Duang Taa Nai Duang Jai" literally translates to "Eyes in (the) heart". It stars Yardtip as a college student who is the head of her E-san traditional dance club. The term used is "Pong-Rang" which I'm told is a type of drum but can be used to identify the dance catergory. Basically it is a traditional northeastern Thai dance and sometimes the chracters break out in the northeastern tongue.

Yardtip takes the role of "Plengpin", pleng means music and pin is a type of musical instrument. She goes off to interview for internship at a company, which of course belongs to our male lead, First, taking the role of "Saht Wanajak". Saht is the CEO of Wanajak Group and meets Pleng by almost running over her. There is also a ghost thrown in the story. It is the ghost of Saht's grandfather who refuses to move on because he can't stand to see his grandson being a playboy and scares off all the gold diggers he dates. The grandfather of course meets Pleng and she is the only human to be able to see him. He likes her and wants her to be his granddaughter-in-law.

Grandfather Wanajak helps Pleng pass the interview and Saht meets Pleng and finds her to be very odd and is intrigued by her. He then asks her to be his pretend girlfriend to escape from super gold digger "Mook" (major evil bitch alert). Long story short, they fall in love but of course there are obstacles like Mook, Pleng's long list of admirers and a mafia boss too.

Please feel free to edit any portions of this drama