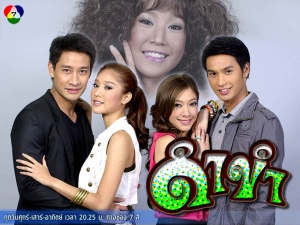 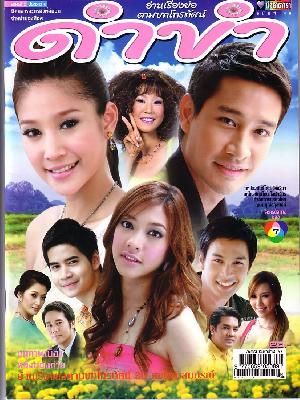 Gale Manee or Nou Dam a young woman in the country region of Loie is shocked when she finds that her father Garm Narm of the region has engaged her to his best friends son since they were children. The person her father has engaged her too is Tudtiya a young bachelor and the only son of Tiwa and Puang Kaew. Tudtiya is perfect in every way looks and family name so he refuse to marry a country girl that he has never seen before and also he has Daowadee a sexy young woman as his girlfriend

Dum KarmGarmnarn Daeng and Tiwa has been best friends since they were children. The two had a promise that they will let their son and daughter marry. With a gift of 1000 plantations. Tiwa doesn’t want to break the promise so he forces Tuditya to go and see Nou Darm. Nou Darm hears that her future husband is a city boy who despises country people so in order to tease him she paints herself dark and pretends to have no style or education so that Tutidya could despise her and won’t marry and as planned he does despise her and also announces that he will never marry a woman like Nou Dam. Upon travelling home Tudtiya’s car crash and Nou Dam comes to find him and helps heal him until he is awake and once he is awake Nou Dam realizes that he has lost his memory and takes advantage of this. She takes him to her plantation and tells him that he is an employee there named Tui. Nou Dam teases him in many ways and lets him eats and sleep in the sand. Only Bpar Tanorm who is one of Nou Dam’s servant in the plantation knows of Tudtiya’s real identity and tries to help him in so many ways. Nou Dam sends a message to Tuditya’s house saying that he has run away and will not return home until his parents end this marriage promise

Dao Wadee is very worried once her young boyfriend has dissapeared. One day she has a reason to travel by Loie Province and she see’s a farmer that looks similar to Tudtiya so she goes and investigates. She finds that Tui doesn’t recognize her and she dislike how he is just a plantation farmer. Instead she is interested in Tong Rop a young developer who is in love with Nou Dam

At the same time there is a young woman within the plantation Bua Dtong who likes Tui. She takes care of him in so many ways and tries to help him when Nou Dam teases him. Nou Dam starts to get irritated by Bua Dtong. At the same Poo Yai Daeng finds that Nou Dam has hidden Tuditya. Puang Kaew sends Daowadee to go and bring Tudtiya home and they heal him until he regains his memory and realize everything that Nou Dam has done and tries to find a way to avenge himself

Tudtiya announces that he will marry Nou Dam because he wants revenge against her. At the beginning Nou Dam doesn’t agree but Poo Yai Daeng threatens her that everything will go to Tudtiya and this forces Nou Dam to marry Tuditya. Nou Dam undergo’s the ceremony in the image of the Country girl painted completely black and comes to live with Tudtiya’s family in the city. Nou Dam teaches Bua Dtong that has followed her to mess with Daowadee and herself tries everyway for Tudtiya to divorce her and even gets close servants in the house Baan Atimali, Bpaa Hom, and Ai Mai. Nou Dam and her team speaks in Esarn without caring about anyone and when there is a beauty pageant. Nou Dam goes and enter the contest and paints herself completely black causing the Tichapan family to be embarrassed all over the place. Tudtiya starts to get curious when he sees a young woman that looks like Nou Dam but dressed modern and is very pretty around him and Daowadee. He tries to catch her, but Nou Dam is able to escape every time. Tong Rop asks that Nou Dam stop painting herself black and Nou Dam says she will not quit until she gets all of her lands back

Tiwa and Poo Yai Daeng see’s that the marriage of their children will not work out so they try and trick them that if they divorce then they will sell the land to Sia Darmgerng who is interested in buying the land for creating a golf course. Puang Kaew is very happy because she dislikes her country daughter in law. Puang Kaew doesn’t know that the real reason that Tiwa wants Tuditya and Nou Dam marry is because their family is about to be bankrupt. Tudttiya and Nou Dam realizes that the land could become a golf course so they are forced to turn towards each other because they don’t want the villagers to be affected by the golf course and destruction of nature. So they tell Poo Yai Daeng and Tiwa that they will continue to stay together but both fathers have a proposition that the two must have a child together. Bua Dtong at the time had slept with Ai Mai the driver and got pregnant. She didn’t want the baby so Nou Dam proposes to take care of the child. Nou Dam then pretends to be pregnant and takes care of Bua Dtong’s child. Tiwa and Poo Yai Daeng is curious but wants to see what the two is up to so they let it go on. Nou Dam and Tuditya while pretending to be mother, father, and child starts to have good feelings for one another, but in a turn of events Ai Mai and Bua Dtong decide to get married and asks for their child back to raise themselves.

Once they are caught that the collaborated in lying. Poo Yai Daeng and Tiwa sends to live together in the rice farm and take care of one another. Puang Kaew sends Daowadee to go and separate them. Sia Darmgerng see’s that the plantation transaction is not going so well so he sends people to hurt Nou Dam but Tuditya comes and help her in time and this causes the two to feel good towards each other. Tiwa confesses to Puang Kaew that their family is bankrupt. Puang Kaew and Daowadee tries everything for Nou Dam to find out that Tudtiya married her because he wanted her family’s wealth. Nou Dam is very sad and ask for a divorce from Tudtiya and goes on her way back home to Loie Province by herself. How will Nou Dam’s and Tuditya’s love turn out?