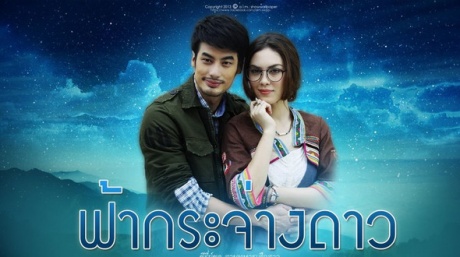 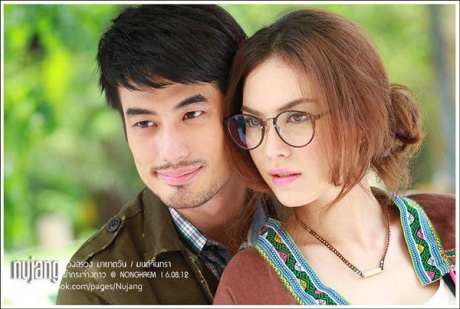 It is such an optimistic title for a lakorn with a dark backdrop, probably the most serious out of the three. The n’ek (Mee) has a pretty messed up past, she was raised by her aunt (her father wouldn’t take responsibility over her mother when she was preggers at 15, yes 15! So his sister took n’ek in, then her mom got married off (by her grandma) to a messed up man.) But her aunt is pretty strict so one day she ran off to find her mother in Northern Thailand. However, she encounters an abusive stepdad who is involved with human trafficking. Her mom is helpless within his evil wrath and so Mee went back to find her aunt whom became less strict and nicer to her. Some time later Mee caught wind that her grandma passed away, and that her two younger sisters (from her step dad and mom) were sold to prostitution.

From then on, Mee is determined to be a news reporter so she could reveal the monstrosities of the crimes against humans. After graduation, she went to work for a newspaper firm called Siam Sarn, heading up their crime division. She meets with Waree and then Mattana, who made up the rest of the three Musketeers group. Mee is the mother hen and takes care of her own- as far as her character, she is quiet and well mannered, but while at work, she’s brave, fierce and ready. She has guts to report on these types of news because of the old wound that came from her family. During the time that the three girls separate to fulfill their own news, Mee has to take on a fashion show column in place of Mattana (who has to investigate a celebrity news out of town)- Mee despises writing about fluff – but eventually succumbs because it turns out it is within the scope of her crime sphere- the committee who is running the show actually has to do with anti-drugs.

She has her first encounter with our pr’ek (Boy Pakorn) at the train station while she was picking up her mother and nephew- but she mistakes him for being a bad guy who is after a little girl (she received news about this prior to meeting him, but failed to look at the picture.) Turns out he is a police officer, hah. Because of their involvement in the same crime area, they have many encounters and become closer- pr’ek takes advantage of their similar field to flirt with her- always under the guise of “work.” But the two’s relationship developed through the course of their risky ventures- love seems to develop under life threatening circumstances. She’s ballsy but well mannered. He’s interested in her. And based on his brave self and handy gun, Mee admires his heroism. So Mee follows along the risky cases with him, partly for work and partly for her heart (because she’ worried about him.) But when she takes matters into her own hands, by using herself as bait in the human trafficking case, our pr’ek sees red, and upon discovering the news and rushing to save her, he orders her to never risk her life like that again. Awe. This dark, twisted story about human trafficking, drug warfare, and woman/child abuse will make for a sobering watch, but hopefully we’re thrown a romantic love story as well as some fun girl power too. This new, fresh pairing should set off fireworks.