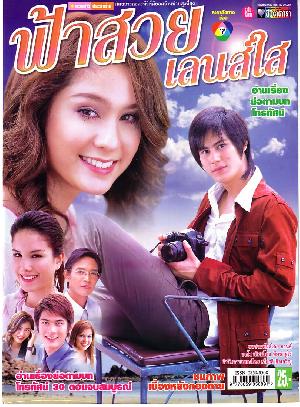 "this is such a good lakorn! a really good comedy! :) anyway, here's the summary: nam is a fashion photographer, kwan helps out at her dad's corportion (which makes wooden toys for children), and nam's friend (whose dad owns a big company and is rich) is a major player. kwan spends her free time helping out at the senior center, reading with the grandmothers,etc.) it starts off with nam rushing off to meet his girlfriend Gigi (the n'rai) and one of the grandmothers passing out, so kwan just jumps into nam's car and tells him to go to the hospital. kwan at first thinks that nam is a good person, but then she misinterprets him, etc. nam of course thinks that kwan is bossy, talks too much, etc. nam lives with his mom (who used to be a fashion model; his dad died) and kwan lives with her dad (her mom died when she was really young). well, their parents are dating, but they don't know until their parents tell them that they want to get married...of course kwan and nam are a little unsure, but then they ok it to make their parents happy. but when they meet each other (they've been arguing whenever they see each other), they tell their parents that no way are their parents getting married. eventually, kwan and nam let their parents marry and agree to be siblings to make their parents happy. they end up falling in love, but they can't tell their parents like they planned to, since nam's mom becomes pregnant. kwan's dad finds out and kicks nam out of the house. anyway, kwan's dad has been having an affair with his secretary and when nam's mom sees them in a hotel room together, she's just heartbroken and falls down the stairs, losing her baby. kwan and nam are each taking their parents' sides, so they end up fighting again. all through this, kwan's friend is stalking nam's player friend, since they met on the internet. nam's friend finds kwan's friend too possessive, but they eventually fall in love, as well (after kwan's friend threatens to jump off a building). of course, kwan and nam get together at the end, and their parents accept it. :D" - (summary by thai-lakorn-fan-forever at asianfuse.net [1])