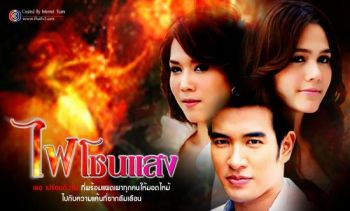 The Bright Fire Light centers around twins, Tianwan and Wantagon (Chompoo Araya). Wan returns to Thailand from abroad after receiving news of her father's abrupt death. Though it's said that he died of a car accident, Wan knows her father better than that and suspects foul play. She later discovers that her father had two business partners that betrayed him, Khun Anon and Tian's boyfriend's father. Because of this, Wan seeks revenge against them to get justice for her father's death.

Wuntakarn hurridly comes back home from America when she finds out that her father, Wasu, has died. Tienwun, Wuntakarn's older twin sister is shocked when she hears that Wuntakarn plans to get revenge for their father's death. Wuntakarn believes that their father's death is suspicious and not an ordinary death from burglary. Tienwan is stressed and talks with her lover, Natin. Natin is also shocked because he knows his father, Nat who is also Wasu's best friend, is aware of the suspicious nature of Wasu's death. Wuntakarn is stressed because she can't find any evidence about the death so she goes to see Pong, who is in charge of the case regarding her father's death. When Wuntakarn meets Pong, she knows that this family man could not be the cold blooded killer she is looking for. All she hopes for is that Pong will tell her something about the death. When Wasu's business partner Anan, the man also responsible for Wasu's death, knows tthat Wuntakarn has been contacting Pong, he fears that the trail will lead her to him. Therefore he sends his bodyguard Karn to go kill Pong.

When Wuntakarn comes to see Pong the next day, she finds out that he has committed suicide. Wuntakarn goes to see Nuch, Pong's wife, and Nuch tells her that Pong decided to end his own life because he didn't want his family to get hurt. Wuntakarn is sure that she's on the right track. While going through Wasu's journals, Wuntakarn finds out that Nat had a part in her father's death. Wuntakarn does everything she can to get closer to those in power to the point of getting the title of "High Class Bar Girl." She wants to get more information about Nat and what he did to get power. Getting to this point wasn't easy but luckily Wuntakarn had a gay friend named Cookie, who was Mama-san for side line girls to help her. Wuntakarn takes her evidence to Taan Rong Winai, and soon Nat falls from his position. Wuntakarn's actions causes Jong Kol and Nattaporn to become angered. Natin tells his mom and sister to forgive Wuntakarn since not long ago she also met with heartbreak. Jong Kol tells Nattaporn to find a way to get Chartchai, the only son of Khun Chat and Khun Lada. This couple had both money and status. However, Nattaporn isn't able to win Chartchai because Chartchai had fallen in love with Wuntakarn at first sight. He tries to get her to go out with him but Wuntakarn always pushes him away. Ah'Ma, Chartchai's grandma, his servant Lor and Wuntakarn's servant Suay try to help out Chartchai. Wiroj, Chartchai's close friend, warns him not to get close to this "High Class Bar Girl," but Chartchai doesn't listen. He believes that underneath Wuntakarn's fire and charm, there lies sadness, uncertainty and hurt in her eyes, as if she's hiding some kind of truth. Chartchai feels a longtime bond to Wuntakarn, without knowing that she was "The Little Witch," his best friend from childhood.

Wuntakarn also doesn't know that Chatchai was "The Little Crybaby" her best friend she left behind before going to America, causing them never having said goodbye to one another. Khun Chat and Khun Lada are interested in having Wuntakarn work with thim so they told Chartchai to help talk to her for them. Chartchai is willing because it gives him to chance to get closer to Wuntakarn. The closeness and caring causes Wuntakarn to waver, but she keeps having to remind herself that she already has a lover named Khemarat. Wuntakarn attempts to create space between them. Chartchai is saddened but won't give up and continually gives Wuntakarn support from afar. Khemarat is going around charming other girls, and one of happens to be Chartchai's sister, Siriwadee. They end up sleeping together so Siriwadee asks Chartchai to separate Wuntakarn from Khemarat. Chartchai is sad to see Khemarat play Wuntakarn. Nat is shocked when his family is sued for everything they possess, so he asks Anan for help.

In the past, Nat was the one being used to the point that he betrayed his best friend. Tripradub, Anan's daughter, pretended to help them out by saying she would marry Natin in order to bring Nat's status back up. In truth, she had always secretly loved Natin, but Natin refuses to marry her because he already had Tienwun. Nat and Jong Kol forced him to marry Tripradub by lying that Nat had a heart condition. For his family, Natin had to agree and marry Tripradub. Tienwan was devastated when she found out the news because at that moment she realized that she was pregnant with Natin. Tienwun decides to go to America without telling anyone of her pregnancy. Before she left, she begged Wuntakarn to stop her revenge because it would just become a fire that burns everyone in its path. Wuntakarn says that SHE is the fire that will burn those who have hurt her family. Wuntakarn finds out that Anan is also involved in the killing so she risks herself to get closer to him so she can send evidence to Winai. Cream, Winai's wife misunderstands her husband's relationship with Wuntakarn and has a slapping argument with Wuntakarn. She reveals the news that Wuntakarn is a "High Class Bar Girl" which displeases Khun Chat and Khun Lada. They warn Chartchai to not get involved with her and force him to help out with the family business instead of being a lowly photographer. Chartchai refuses and says he'll continue being a photographer who will stand by Wuntakarn. He hopes that one day his pictures will become very valuable.

Without Tienwun, everything for Natin is pointless. He lives everyday like walking death and never touched Tripradub. This causes Tripradub to be furious, and even more so when her dad, Anan is going to make Wuntakarn her new step-mother. Anan confesses that he doesn't love her but is using her, in hopes that when she's his wife she'll stop her digging about the past. Whether it be his illegal lumber, drugs and other things. Her revenge will stop. Wuntakarn is unaware of how evil Anan really is, she tries to trick him to find out information but to no avail. The stress causes her a lot of headaches, when she goes in to check up she realizes she has a horrible disease. When Khemarat finds out, he tells Wuntakarn to stop her revenge to go take care of herself. Wuntakarn refuses and says she'll get revenge on Anan at all costs. She asks Khemarat to keep her disease a secret. At this time, Siriwadee is pregnant and asks Khemarat to take responsibility. Khemarat is torn between his worry for Wuntakarn and his love for Siriwadee. This makes Siriwadee sad. At America, Tienwun gives birth to a daughter named Nong Koy. Tienwun asks Pattapee to keep the secret from Nong Koy that Tienwun is her mother. Pattapee disagrees, saying Nong Koy has the right to know who her parents are. Suay calls Tienwun to tell her that Wuntakarn isn't feeling very well these days. She faints and throws tantrums often. Worried for her sister, Tienwun comes back to Thailand. Tienwun accidently runs into Natin, when Natin sees Nong Koy he knows for sure that she is his daughter. Natin asks Tienwun for the truth but she denies it despite still loving Natin.

Tripradub is stressed to see that Natin still loves Tienwun so she goes and slap and yell at Tienwun. Natin asks for a divorce and Tripradub is more stressed out of anger for Wuntakarn and Tienwun. She curses that these two sisters will hurt like she has. Anan takes back the money he used to help Nat back. Nat resorts to drinking heavily and becomes an alcoholic and paralyzed. Natin takes his family to go rent a house somewhere else. Jong Kol no longer hold her head up high and Nattaporn becomes a side line girl with Jae Cookie. Wuntakarn is satisfied and hurt at the same time. Chartchai is angry at her for using revenge to destroy everyone. Wuntakarn is heartbroken. Natin is vengeful at Anan for destroying his family so he tries to kill Anan. However, Natin is beaten by Anan and Tripradub, he falls into a coma from his injuries. Tienwan is devastated, he cries for him to wake up so they can be a family again. Tienwun begs Wuntakarn to stop her revenge or else she might end up like Natin. Evil and powerful people like Anan are difficult to bring down. Wuntakarn refuses to listen, Anan's ability to walk around like nothing's happened angers her. She is willing to do anything to bring him down, even if she has to die. Chartchai sees Wuntakarn's persistence and says he will help her and stand by her side. In the end, the two of them sleep together at the beachside house. At the same time, Khemarat and Siriwadee are able to make amends.

Anan, Nai Pol Surawut and Tripradub plan to make Wuntakarn trust them completely. When all the plans are in motion, Wuntakarn falls into their trap. She informs Winai that Anan is going to transport drugs hidden inside illegal wood. When Winai and his officers check the commodities, the cars that Wuntakarn brings are full of illegal items but there aren't any of Anan's cars. When Tripradub shows up to rub it in her face, Wuntakarn knows she's been tricked. She is so angry that her condition begins to worsen. Wuntakarn is rushed to the hospital, Chartchai's heart is broken. The disease has taken over her body because she failed to take care of herself. Chartchai tries to find the evidence to arrest Anan. Luckily, Chartchai followed Wuntakarn and took pictures of Anan, Nai Pol Surawut and Tripradub handing over some important documents to Wuntakarn. This evidence is crucial enought to arrest Anan, Nai Pol Surawut and Tripradub. Chartchai brings this into Winai, at the same time Natin wakes up from his coma and tells the police that Anan and Tripradub were the ones who beat him nearly to death.

In the end, Anan and Tripradub are unable to escape from the law. The two plan to leave for abroad but the police surround them. Anan tries to escape but it hit by a car and become paralyzed. Tripradub manages to escape to the border. Chartchai asks Wuntakarn to go in for recovery but Wuntakarn knows that she doesn't have a lot of time left. Wuntakarn asks Chartchai to marry her and he takes her to get married at the beachside house that they once dreamed of. The day of the wedding, Wuntakarn is admiring herself in the mirror and is happy to be marrying the man who loves her and who she loves also. However, Tripradub shows up and plans to hurt Wuntakarn. Wuntakarn, being weak from her disease is unable to fight her off and is dragged by Tripradub to the cliff. Tripradub plans to throw Wuntakarn off thee cliff. Will Chartchai be able to rescue her in him? How will the love between the two end? Will Chartchai love's be enough to smoulder the fire burning inside Wuntakarn? Stay tuned to find out.