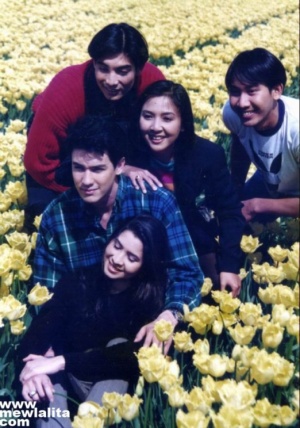 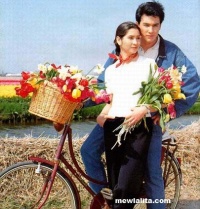 Lisa belonged to a wealthy family. She has a good family background, and her father was an ambassador for Thailand in Amsterdam, Holland where they live. One day Lisa and her friend mary went to eat at a resturant. This is where she meets Mike. Her friend went to the bathroom, and she saw all the nice perfume bottles and soaps in there. She decides to steal it. Mike suspects something so he went to the washroom and saw the items missing. When he went to confront Mary, all he saw was Lisa because Mary went to use the pay phone outside. Mike wanted Lisa to take responsibility. Lisa was forced to pay for the missing items, and to make Mike mad she tipped him five cents. Their first meeting was not a good one.

Mary and Mike's best friends became friends when Mike's friend rescued her from a robbery in her own apartment. Eventually Mike and Lisa met again because of their friends, and they began talking and came to an understanding and became good friends. Because Mike is such a sweet, handsome, and romantic guy he eventually made Lisa fall in love with him.

There was only one problem, Lisa's grandmother is very strict and wants to control Lisa's life like she controlled Lisa's father life. Her father was first married to her mother without her grandmother's approval. Her mother that gave birth to her. Because of her grandmother's force and power, her mother was driven out of the family. Her father listened to his mother to much and was powerless from stopping his own wife from leaving. Lisa's grandmother then forced her father to marry another woman of a better background. Her grandmother thought that she was doing what was best for the family and didn't think of how she was hurting them.

When Mike went to ask Lisa's grandmother's permission to date Lisa, her grandmother was disgusted with Mike's poor background. She immediately refused and told Lisa never to see Mike again. But they continued seeing each other behind her grandmother's back. One of the most romantic moments in the drama was when Lisa lied to her grandmother, by saying she had to go on a trip for her university, but instead she went on a trip with her best friend, Mike, and his best friend, very, very romantic.

Her grandmother wanted to make sure that Lisa married a wealthy well breed man, so she arranged a marriage for Lisa. One time her grandmother wouldn't let Lisa go to a party without taking him with her, but Mike was going to meet her there. Then they conspired and got her fiance drunk and he passed out, while they left the party to be with each other. Lisa and Mike went to a fair and road the Ferris wheel.

Her grandmother grew suspicious and anxious. She didn't want Lisa and Mike together. she planned a suprised wedding for Lisa and forced her to get married. Lisa's step-mother helped sneak Lisa out of the house where Mike was waiting for her. They ran away together. They stayed in a cabin near a river. Just outside of Amsterdam. This is where they confessed their love, and lived happily for awhile, together. [The scenes in the cabin and during this part was really romantic)

When her fiance lost his face and honor, when Lisa ran away he was so embarrassed. Her step-mother had sent a message to the newspaper in Thailand to tell them the story, and about her fiance. Her fiance and his family vowed to take revenge on Lisa and Mike.

Her step-mother loved her, cause ever since Lisa was young, she was the one who raised her. But her marriage with Lisa's father was not a good one. Lisa's father never loved her, and that's why they never had a child of their own. When she saw a letter that Lisa's mother wrote telling of her return to Amsterdam, she grew very jealous. She had a confrontation with Lisa's father and he confessed that he never loved her. Lisa's father wanted a divorce. She hated Lisa's father and blamed Lisa's grandmother for her misery all these years with living with a man that never once loved her. That is why she is plotting to ruin Lisa's family. She was the one that sent Mike and Lisa to the cabin. She then told Lisa's fiance where to find them knowing that he wanted revenge. She eventually went insane, cause her life fell apart. She had hallucinations, and truly believed that she was pregnant. She began to knit baby socks and clothes, but it was impossible or her to get pregnant. She was too old and her and her husband slept in different rooms.

Lisa's finace arrived at the cabin with his body guards and attempted to kill Lisa. But our hero Mike came to her rescue and beat the two body guards and the fiance up, then sent them running home. but before he did they sabotage the brake's on Mike's car. Her step-mother got there also and she got into an arguement with her husband and she tried to escape them all and she got into Mike's car and drove off. She died cause the brakes didn't work. She ran into a tree. All this time Lisa's mother returned to Amsterdam she had followed her daughter everywhere. She wanted to know how her daughter was, but was too afraid to meet her daughter and tell her who she was. One day she decided to tell Lisa. Lisa couldn't believe the news. She never knew who her mother was and suddenly she appears in her life. At first it was hard to take, but then she was happy to finally have her mother with her.

When her grandmother found out what her fiance tried to do to Lisa and that the step-mother went insane and then died, she felt guilty. She felt responsible and guilty for ruining her son's life and affecting so many people with her biased and discriminative decisions. She was sorry and vowed to let everyone make their own decisions.

Lisa's mother got back together with her father. Mike brought his family to officially ask for Lisa's family's blessing and consent to his and Lisa's engagement. It turns out that Mike wasn’t poor at all. His family was very wealthy back in Thailand. Everyone thought that he was poor because he worked as a waiter in a restaurant while going to school. Mike only worked his way through school because he wanted to stand on his own two legs without his family's money or help. He had a huge sense of responsibility. Everyone was amazed by this new, especially Lisa. Her grandmother was happy. At first Lisa was angry that Mike lied to her all this time but then she loved him too much to be angry for long.