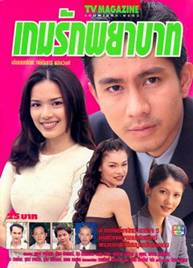 Athirat decides to seduce Romanee, Ratree's eldest daughter. Athirat changes his name to Archan. He goes to the flower shop and meets Ramida (Aom), the shop owner. Athirat doesn't know that Da is Ratree's youngest daughter. They develop a bond as Athirat frequently visits the shop to buy his mother plants to buy.

Athirat shows up at a party that Ratree is hosting for her company. Da doesn't want to get involved in her mother's business but her mother insists that she show up and meet the important guests. Da and Athirat see each other and they talk until Romanee shows up and thanks Da for keeping her boyfriend company. Da then avoids Athirat until he confronts her about her being angry at him. Da tells him she isn't angry and brushes him off until she trips and he carries her to bandage her foot.

Romanee takes Athirat to her company and he makes a big impression on Ratree, who later hires him. Romanee's right hand man, Minyu, distrusts Athirat. so Athirat and Chaiyakorn frame him as a swindler of the company. Minyu is fired and he tries to maintain his innocence to Ratree, he loses his temper admits his long hidden feelings for Ratree and tries to sexually harass her. Ratree calls for help and Minyu goes on the run. Minyu tries to corner Da to help him by talking her mother into believing him and he goes berserk and tries to harm her. Athirat comes to her rescue and they hug and Romanee's best friend, Mint, witnesses the whole thing. Athirat and Romanee are having issues at this time as Athirat puts all his time and energy into his work. She gets mad at him when she finds him with Da as Da was baking a cake for Athirat to give to Romanee in celebration for her winning an award. Romanee slaps Da and runs off. While Athirat was saving Da, he misses his date with her where he was supposed to reconcile with her.

Da tells Romanee to be sweeter to Athirat so she decides to go his mother to get to know her. Athirat is enraged to see her with his mother since his mother knows nothing about his revenge plans. He tells her to go home, causing her to get very mad at him and run off. He tells Chaiyatorn that he wants to abandon his plans for revenge because he doesn't like Romanee. Chaiyatorn talks Athirat out of it, saying they are almost done with their plans and once that his done he can love who he wants.

Broken hearted, Romanee overdoses on drugs. Athirat is at her side out of guilt and tries to make it seem like he is in love with her. Romanee doesn't believe him and becomes depressed and reclusive. Chaiyatorn kills Minyu before he tries to give evidence to Ratree that Archan is Athirat. Ratree wants to give Athirat Minyu's position but she tells him in order for her to do that appropriately to an employee who hasn't worked there very long, he has to marry Ratree and be part of her family first. Athirat proposes to Romanee, who tells him that she'll think about it. Mint tells her about her witnessing Da and Athirat hugging and Romanee sets out to prove that Athirat doesn't truly love her and loves Da. She tells him to come meet her in Pattaya to receive an answer about the proposal. He is shocked to see Da in Pattaya too and realizes that Romanee is up to something. He finds a knife in her room and he begins to get paranoid and fears for Da's safety at every turn. He abruptly stops dancing with Romanee at the club to save Da from a guy who is getting too close to her and Romanee gets drunk after seeing this act of kindness. She confronts Athirat and tries to stab him. She packs up and leaves. Athirat confesses his feelings to Da and Romanee shows up, her suspicions confirmed.

Stressed with all the overwhelming work, Ratree gives in and gives Athirat Minyu's position. Athirat brings in a wanted conman from New York, Roger Waterman to give a pitch for a lucrative investment plan with Ratree. Ratree signs off on it. Athirat and Roger swindle 700 million baht, exactly how much is father lost. Athirat thinks this is enough for his revenge and makes plans to leave, however, Chaiyatorn has other plans and makes a deal with Roger to take all of Ratree's money in her company. Romanee finds out that Roger is wanted by the FBI and tries to go tell her mother but Chaiyatorn kidnaps her and drugs her. He then sends her to a mental hospital in her drugged up state and Romanee is stuck there for weeks. Romanee confronts Athirat about all the lost money and he is genuinely shocked, not knowing that Chaiyatorn betrayed him. Athirat is then framed for everything and goes on the run. Chaiyatorn betrays Roger, who then steals the files for the all the money transferring and gives it to Athirat in exchange for money. However, Chaiyatorn has changed the password and Athirat cannot give the money back to Ratree.

Ratree suffers a stroke and is handicap after dealing with all the bad news about her company. Ratree commits suicide after Romanee managed to escape the mental hospital. Da and Romanee are forced out of their house after the government takes all their property since Chaiyatorn attempted to take the millions he swindled out of the country, which is illegal. Athirat tries to reason with Da and insists that he is sorry and didn't want this all to happen. He tells her that he will get her money back to her. Da refuses to listen to him and Mint tattles to Romanee that Da let Athirat go without calling the police, causing Romanee to slap her. Romanee finds Chaiyatorn and kills him after getting the code for the files. She calls Athirat for him to come see her for one last time and then she will give herself up to police for murdering Chaiyatorn. Athirat agrees in order to get the passcode for the files. Romanee asks him to sleep with her for one last time but he has trouble doing it. Da shows up to the hotel after Athirat's friend tells her that Romanee has killed Chaiyatorn and is meeting Athirat. Romanee slaps Da and gets mad at Athirat for coming to Da's defence so she points a gun at Da and Athirat ends up taking some bullets. Feeling dejected, Romanee shoots herself in the head. Ramida makes plans to go study in Australia and a remorseful Athirat ordains as a monk.