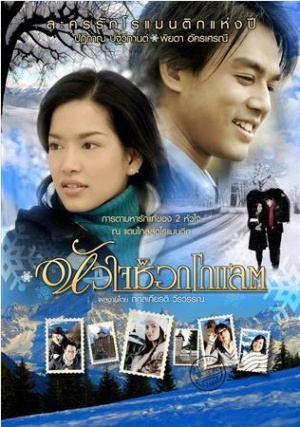 "Hua Jai Chocolate" is about Chun (Mos), a rich young man, who does not know the real meaning of love. But when he went to Switzerland to study hotel management, his life changed.

During his stay there, he befriended Wan (Aom), who was also studying hotel management. As they continue to spend time together, she taught him about love. When Wan learned that Chun was allergic to chocolate, she tried to find a way to help enable him to eat chocolate. She made chocolate candies without chocolate powder, which is called white chocolate, and offered it to him. Since then, their love for each soon blossomed.

When they went back to Thailand, they separated because Chun's ex-girlfriend still wanted him. As for Wan, she didn't want to declare her love for him because she was afraid to get hurt again. It reminded her of the last time she fell inlove, which was her ex-fiance, he cheated on her.

Chun tried to pursue Wan but gave up because he thought she was inlove with her childhood friend. When he foud out about her pregnancy and confronted her, she lied to him that the baby was her best friend's. He believed her and left. Then Wan and her best friend moved to a different place because she didn't want Chun to know that she was pregnant with his child all along.

During their separation, Wan's best friend died because he was diagnosed with a disease and Chun's ex-girlfriend stopped pursuing him.

Five years later, they met again, but will they be together again in the end?