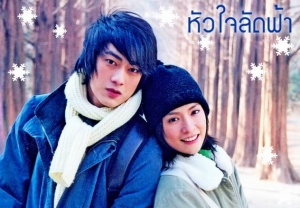 Film is a famous Korean star in Korea and Thailand. He has family problems that he also wanted to solve because his father who he never met but heard of lived in Thailand and his mother lived in Korea. Donut's friends are crazy about Film so they all decided to go to Korea to meeet him. The day they got there, Donut went alone to a stand while her friends already got on the train. So she was on her own. She was walking through the woods where her bag got snatched. Someone helped her get it back. She didnt know that it was The Famous Film because she never payed any attention back at Thailand.they spent the night at a house together --innocently-- He lied that his name was Kimchee and she believed him the whole time.

later on she found out who he was a disliked him from then on because he had lied to her about who he was. but she wanted to help him out because he asked her for a favorite to find his grandma(dad's mom)

--conflicts came in btwn. them two when the media got on his case and his co-star from his k-movie comes back in town--

is their love strong enough to take down the media?