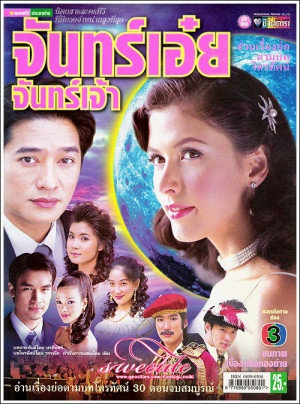 The story was about Jan Jao (like the title), she had ability to see and hear spirits. Jan Jao was raised by her father's friend since she was an orphan and one day her real grandfather wanted her to return to his house to get all the fortune of Surasit family through Parameth's help as her grandfather nephew. Since the first time Jan Jao came to Surasit's residence no one gave her warm welcome except Parameth and Paramee (Parameth's brother) and the grandfather. Jan Jao entered new school and made friends one of them was Nudee an orphan who also had ability to see and hear spirits. Jan Jao always haunted in Surasit's residence by her mother's spirit while Nudee who was living in school's dormitory was always haunted by a ghost in the opera building just near the dorm who later known as Miss Surani a teacher from the school whom suddenly disappeared more than 15 years ago without a trace. The spirits were asking for Jan Jao and Nudee to find their bodies to release their souls so they can rebirth again and to take revenge for their killer. Jan Jao, Nudee, their friends, Parameth, the new teacher, and the police captain tried to uncover the truth of her mother and Miss Surani death.

The grandmother always acted mean with Jan Jao while her aunt and her family always insulted her and tried to kick her out from the house but Parameth always came to her rescue and cared a lot toward her. When the problems finally solved and the true killer finally revealed himself and the spirits can be freed Parameth left the Surasit's family and out of town. Jan Jao realized that without Parameth she felt empty, but then Parameth came back to her and realized his feeling for Jan Jao was not as the guardian but as a man to a woman and they finally ended up together.