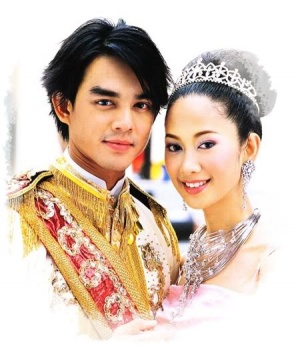 Wakim is a prince and his parents want him to marry a nice princess. Wakim thinks that he should marry for love and not for titles. His parents however bring over a couple of princesses to show him including one from China (Jamie Buher) and Korea (Nadia Nimitwanit). Wakim isn't interested in either of them but shows some interest when he meets Sonia Couling, a princess from a neighboring country. She is pretty, but when he starts talking to her he realizes that she doesn't have a mind of her own and does only what others tell her to. Wakim decides that he needs to go out and find his own princess, and him and his servant Ah Thu (Tik Shiro) sneak out of the palace and go to Thailand. Ah Thu is used to the good life and wants to spend a lot of money, but Wakim, used to having everything done for him, wants to live the less splendid life.

One day, Wakim and Ah Thu almost get run over by a car when they are walking around in the slums. The car belongs to a rich girl named Angie, and when Wakim sees her, he thinks that she is the princess he is waiting for. He also runs into Mod Dang when they go to her store the '7 Elephant' and try to get drinks but she mistakes them for burglers. Wakim and Ah Thu end up living in the slums that Mod Dang is living in, and he tries to find ways to meet Angie. Angie also likes him too but because her father thinks she is too good for Wakim, he tries to separate them. Mod Dang and Wakim get to know each other more, and Mod Dang thinks there is something weird with him because he acts very proper and Ah Thu always seems to be calling him 'Jao Chai' (Prince). Angie's dad deals drugs and one day Mod Dang's brother Mod Dam sees them and her dad's bodyguards make it so that he becomes hooked on drugs. Mod Dang is disappointed in her brother when she finds out because he was taking money away from their father, who is also sick. Mod Dang gives Mod Dam an ultimatum, either he willingly goes to get help or she's going to turn him into the the police. Mod Dam then realizes he's wrong and goes get help, but Mod Dang tells her dad that he's away and doesn't want her dad to know. While Mod Dam is away, Wakim comes help Mod Dang out at the store.

Muad Payu also seems to like Mod Dang but she doesn't think of him that way. Wakim's evil uncle, Daboo, finds out that he is in Thailand and send people to go kill him so that he can become king after Wakim's father dies. One day, Wakim, Mod Dang and some of the other slum people go to the beach and Mod Dang falls off a jet ski. Wakim performs CPR and her and she survives, later the bad people follow them there and start shooting at everyone. Wakim and Mod Dang end up separated from the other people and this old couple helps them out. The old lady thinks that Wakim and Mod Dang are married. Angie's dad tries to force her to marry a guy that likes Mod Dang. More stuff happens and after Angie's father gets convicted of dealing drugs, she has to go away. Wakim then realizes that the princess he was searching for wasn't Angie but Mod Dang. Because Mod Dang has the qualities that Wakim was always searching for, kind, caring for her family and her friends, and will do anything for her family. Wakim's mom and dad, Queen Mona & King Abuda, find out where he is and they go to get him back. His evil uncle also follows Wakim to Thailand to kill him himself because his servants failed.

Wakim also tells Mod Dang the truth about who he is and Mod Dang is angry at him for lying to her. Wakim's evil uncle takes his mother hostage but Muad Payu and the other policemen show up in time and they save Wakim's mother. When Wakim tells his parents that Mod Dang is the girl he loves, his father denies her and tells Mod Dang that she is unworthy, Mod Dang then denies that she has feelings for Wakim. Wakim then has to go back to his country broken hearted and that he has to marry someone he doesn't love. The day comes for his wedding and he is sad, he waits for his bride and when he lifts up her veil he is shocked that she is Mod Dang. Apparently, Wakim's mother went back to Thailand to tell Mod Dang how sad Wakim is without her. She begs Mod Dang to reconsider her heart. Wakim's father finally accepted Mod Dang because his wife reminded him that when he first met her she looked like an ordinary girl, even though she was a princess also. She wanted her husband to reconsider and how unhappy Wakim would be without Mod Dang. Wakim is really happy when Mod Dang tells him this and all the people living in the slums and Mod Dang's father is also there. And they finally lived happily ever after!