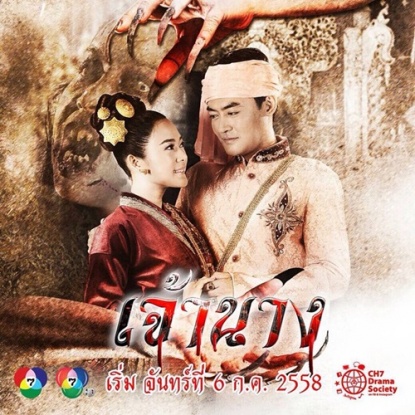 In the ancient kingdom Muangnai located in Northern Thailand, there is a beautiful love story between Jao Rak Fah (Tle Thanapol) and Jao Ying La Ong Kam (Tubtim Anyarin). But love soon turns to tragedy as Jao Rak Fah has to engage with PinMeung (Kratip Chollawan). However, they only get married by name because Jao Rak Fah still sets his heart on La Ong Kam. PinMeung is so jealous that she seduces Jao Rak Fah and lets Jao Ying La Ong Kam witness the whole time. Enraged and heartbroken, La Ong Kam starts to worship Pee Fah (A malevolent female ghost that seeks intestines as food). Eventually, Jao Rak Fah dies because of war and PinMeung is killed by La Ong Kam while being possessed by Pee Fah. Since that La Ong Kam begins to hatch a strong belief that worshipping Pee Fah will let her have a great life. The kingdom is fallen. La Ong Kam and her younger sister, Jao Ying Ruangkaew (Fon Natida) flee to Bangkok. Here La Ong Kam gets married with Khun Chat (Nam Rapeepat) and they have a daughter named Apsorn (Nok Usanee). However, Chat's sister, Chom (Gaivein Orlene) strongly protests this marriage as she knows La Ong Kam is possessed by Pee Fah, which she believes will kill off her family soon, but no one listens to her. In the day, La Ong Kam appears to be a very beautiful and well-mannered lady. In the night, she is nothing more but a vulture that keeps hunting people for their intestines. Those victims include any ages, even a kid that helps her deceive the resident into thinking a female nun is the Pee Fah. Some of the victims are Jao Ying Ruangkaew's lover, fiance of Chom, and a few people. Khun Chat begins to doubt if La Ong Kam is really the Pee Fah like his sister said. His doubt is confirmed as one night, he sees La Ong Kam devouring the intestine of a man. That night leads to his decision to hide his daughter from La Ong Kam. However, La Ong Kam catches up with him, killing both him and his mother. In his final attempt, Chat begs her not to hurt his daughter and never kill any people again. Apsorn runs away from her home.

20 years later, Apsorn has grown into a beautiful woman. She studies abroad and has a sweet love with her boyfriend there. However, she doesn't feel well as she keeps getting nightmare about her mother. In every dream her mother always calls for her help, but she is too scared that she runs away. They are not dreams though, more than a vision created by her mother to contact with her. Eventually, Apsorn's boyfriend declares that he will come back to Bangkok to visit his family, which makes Apsorn very happy. Back in Thailand, La Ong Kam has become a weak old woman that can't do anything but hide in her house. However, Pee Fah still continues to ask for food. Without catching people, La Ong Kam has to feed Pee Fah with her own intestine. At one point, Pee Fah can't take it anymore and decides to pull La Ong Kam's intestine out, which results in her death.

Fast forward to the next 20 years, Apsorn and her boyfriend, has now become wife and husband. They have a daughter named Meungthip, which looks exactly like La Ong Kam. Jao Rak Fah is also reborn as Boungsalak, son of a wealthy family. Boungsalak and Meungthip decide to get married. But again, their love sees an obstacle: Khem. Khem is the grandchild of Boungsalak's maternal grandmother. She tries to seduce Boungsalak to get all of his assets. Meungthip is depressed and La Ong Kam takes advantages of this. She lures Meungthip to the old house and tricks Meungthip into doing a ritual that let Pee Fah possess her. The battle against Pee Fah continues. With the help of Ruangkaew, who has now a nun, Apsorn and Boungsalak are given a Buddha necklace that will stop the god. They have tried various attempt to put the necklace on Meungthip but she always tries to throw it away. Seeing her grandchild becoming more and more savage, La Ong Kam finally realizes that she was wrong to worship the cannibal ghost, and now her grandchild has to pay for her sins. She seeks help from PinMeung, the person once she despised, and Jao Luang, father of Jao Rak Fah, in an desperate attempt to save her grandchild. Finally Jao Luang agrees to help and with a slash from the Holy Sword, Pee Fah is torn apart and dissapears forever. La Ong Kam and PinMeung finally comes to an understanding. The lakorn ends with Meungthip and Boungsalak getting married while witnessing the holy dance to chase away Pee Fah, the spirit that once caused her family to suffer.

I highly recommend this lakorn for anyone interested in a ghost lakorn. The storyline is good, the pace is perfect and the acting is awesome, especially Tubtim's. Tubtim really impressed me with her character, you will want to feel angry and sad with her at the same time.