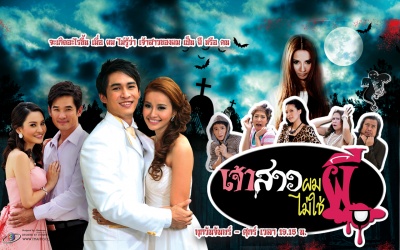 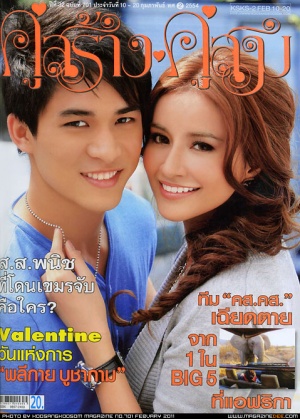 Watch Namfon Patcharin play a twin role in this romantic comedy. The older of the twin, Fah, runs away with her lover, Jaa Maruj, played by M Apinun. The couple gets into a mess and is murdered by an old wealthy businessman. Fon, the younger twin, misses her dear sister and has a presage that something bad has happened to her. When she could no longer take it, Fon runs away from home to Krungthep in search for Fah. When she finally makes it to Krungthep, Fon is robbed. Hopeless, she runs into a young and handsome writer named Thot, played by Kong. As soon as Thot sees Fon, he thought she is a ghost so he runs for his life. Finally, he realizes that Fon isn't a ghost but just a lost woman who is looking for her older twin sister. For many reasons, Fon is forced to stay with Thot and that's when she finds out a good clue about her sister, Fah. Fon finds a picture of Fah under Thot's bed. When she confronts Thot, he tells her that her sister is a ghost haunting a vacant house. Fon vows to find her sister and find out what happened. Since Thot knows where the house is and his job relates to it, Fon turns to Thot for help.