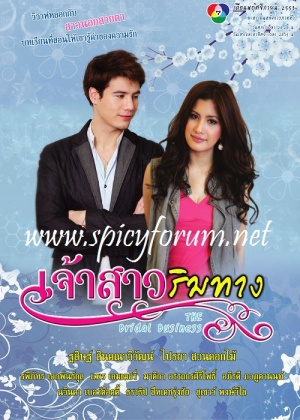 Nang’ek played by “Poo” Praiya Suandokmai is an out of luck, poor, orphan girl raised by her money-hungry foster mom (Apiradee Pawaputanon), who has a spoiled brat daughter played by “Mint” Nawinda Bertotti. Her foster mom also has a no-good, rapist wannabe boyfriend played by Tharathip Seehadetrungchai (yea, I don’t know who that is), who on occasion will try to assault our nang’ek Rasa.

Our nang’ek is the ultimate “nangfah (angel)”, she is a diligent worker–values education, values hard-work, kind to others, innocent, virginal, not too shabby on the eyes. Though they treat her as an ATM machine, she refuses to abandon her makeshift, foster family because she feels indebted to them. Soon after her mother passed away so did her father, her foster mother took her in when she had no one to turn to. She feels a moral obligation to her evil foster mom who on many occasions will abuse and take advantage of her. Essentially our nang’ek will be a weak, kindhearted, idiot with spunk.

As for our pra’ek Akrin, played by ‘Stefan’ Tasit Sinkanawiwat, he is described as a good-looking, rich playboy with charm. He is a heir to a well-known fitness complex called M Fitness. Akrin sees women has a plaything and love as a game. His grandfather Amnat (Khun Suchao Pongwilai) is fed up with his immature, careless, insincere lifestyle and wants him to get married. If he doesn’t get marry by a certain time, he won’t inherit M Fitness. It will be given to his competitive sister Ornuma (Prae Amery) who also has to get marry if she wants to inherit the family business.

As the the marriage deadline slowly approaches and he doesn’t like any of his potential brides, Akrin decides to hire someone as his bride. He hires Rasa, the girl he likes and the only girl in Thailand who has the audacity to reject him every time he makes a move on her. Their marriage will be a sham, it will be for on year and he will pay her 2 million baht ($66,766 USD) total. He will give her 1 million baht at the beginning of their marriage and 1 million baht at the end of their marriage. Rasa accept his offer because she needs the money. Around that time, her foster mother finds herself in the hospital and needs immediate surgery. Thus this is how their life together begins through a fake marriage.