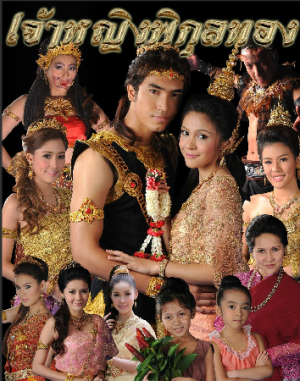 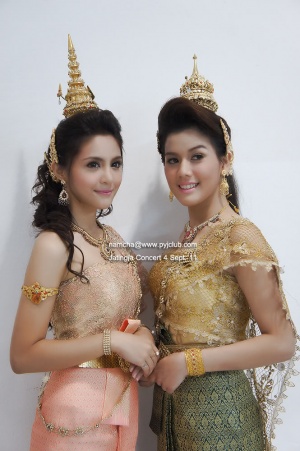 The queen gives birth to Pikunthong, who has golden star sprinkling out of her mouth. The fortune teller says it is bad luck for the kingdom so the amaat took her away and was to kill her but he didn't. He left her under a tree and two farmers; Thamaan and Garawek(Phone) found her. The farmer decides to take her in but he has a mean wife;Mae Payom(Tasanee) who don't like her. They end up having a child of their own, name Chaba. One day Pikunthong helps out an elder(who was actually a god or something) and he tells her that she will be able to go through all her misfortunes. Pikunthong starts feeling sorry for him and golden star starts sprinkling from her mouth. The elder dissappears and Garawek and Maan finds her. They go back home and Mae Payom takes the golden sprinkles from Pikunthong to go sell and they get a better house. Chaba tells her mother that have she wonder where Pikun got the gold from...

Later the Amaat came back to take Pikunthong back to go take place as her title as a princess. They go on a trip and get attack by the Vulture King(Num Mesukwam). Pikunthong gets hidden in a drum by the Boat Nymph(Aom). Pra Ek(Boom) comes and hits the drum and she falls out. He takes her to his kingdom and wants to marry her but then the Queen didn't like her. The queen wanted Pra ek to marry his childhood friend Gaysara(Fah Nampisa), so she wants Pikunthong to walk through fire to prove that she is an innocent person. Pikunthong was about to go through the fire, but the fire goddess(Namfon) helps her out and the fire dies. Pra Ek and Pikunthong gets married and hey go on a trip, but Pikunthong bumps into a Giantress Kamookee and she turns Pikunthong into a monkey and takes her place....