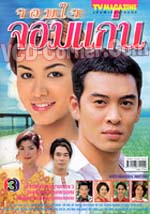 In the beginning Nawin (Krit's character) is seduced by his step mom, chased out of the house by his father and ends up killing his girlfriend in a car accident.

He escapes to an island, buys the property that is sought out by many, including Kradaa (Vicky's character). She ends up working for him and they start having feelings for each other.

There are many obstacles in there way including Nawin's friend Dao who frames him by getting him drunk and ending up in bed together. No matter how he turns her down she insist that he has to be responsible for her, she even went as far as claiming she was pregnant and trying to commit suicide to get his attention.

This causes Kradee to leave the island and escape to the city to continue her studies at her Aunt's house.

Watch to find out if Nawin and Kradaa's realtionship makes it. Also the relationship between Nawin and his father, will they beable to reconcile their misunderstandings.