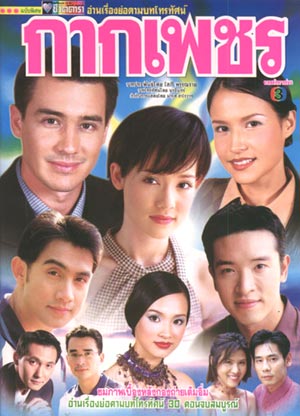 Bua lives with her mom and dad. Her dad owns an architectural company. Her mom is his second wife. He doesn’t show too much affection towards Bua and her mom. Her step-mom and half-sister is not too nice to them either. The only nice person to her in the house is her half-brother. She has problems with her half-sister at school and is where she meets her best friend.

Willy lives in a condo with Nino and Dodo. He and Chanika just recently got engaged. She is a lawyer. Willy and Nino work in another architectural firm. Dodo is a psychologist, who Chanika goes to with her problems.

Willy and Bua meet for the first time when he attends a party that her father holds at home. Although she stays in the kitchen most of the time. He asked her, the way to the bathroom and he later helps her when this guy that works for her dad forces himself on her. He helps her escaped from his paws and when the others show up he blames her, telling that she was flirting and seducing him into it first the food at Willy’s company really sucks. Nino remember the food from the party and he asks Bua’s mom if she’s is interested in a job at his company and gives her a business card. Recently Bua’s step-mom took all the money that Bua’s mom had and so she wanted to make some money to function her family so she took the job. Bua goes there to help her mom and there she meets and talks to Willy again. So from the two bonded because he would help her out and listen to her family and life problems. Which triggered a jealousy in Chanika.

At this time there was a problem at home for Bua. Her mom and dad had gotten in an argument and to prove to her husband her mom slashed her own wrist. So Bua had to take over the cooking duties at the company. Her half-sister also liked Willy and was mad to see that Bua was there also. Filled with anger she tried to choke Bua to death. Willy stood there in shock and Chanika could see the concern in his face and got mad. He went to help her and Chanika left in a hurry. He followed her. Chanika was driving and at a fast rate and Willy was following her at a fast rate.

Bua’s mom had come to the company sick and all to help her daughter. She even left a trail of blood behind her. She was going to cross the street when Chanika’s and Willy’s car came speeding out and she walked out in front of the car not able to react. Luckily Chanika was able to react on time and swerved away from her. Unfortunately Willy wasn’t and her hit her. She was taken to the hospital and her last words were for that she gave Bua too him as his responsibility cause he was the only one that was capable of protecting her. he promised her and she shut her eyes and passed away.

The funeral was held and Bua was mad at Willy for awhile cause he was the one that caused her mom’s death. Her father was enforcing a lot on her and she wanted to make him hurt the way that she was hurt. So she began to rebel. First she cut her hair and then she decided to take a modeling gig. Then she started go to bars and got drunk. This upset her father and Willy. Chanika was also starting to get mad at how much attention Willy was paying to Bua. At this point she also met Chai. Who was the owner of a club called Red Fitness. He had fallen in love with her the minute he laid eyes on her. He also had a sister that was very over-protective and who was also in love with Willy. Chai was the first one to take Bua to a club and to get Willy mad she danced with Chai closely. As well as pretend to be in love with Chai. Although she always had Willy in her heart. Willy liked Bua but couldn’t disappoint Chanika. So he kept it to himself.

Chanika was also starting to go crazy cause of the attention Willy showed to Bua. She started to plot things against Bua. She had a client that could get people to kill and threat people into getting what they wanted. First she had someone try to kill Bua. But she turned out find. She also tried to push Bua down and escalator herself. After those plans didn’t work she turned to a framing scheme. As said before Chai sister is over-protective and she doesn’t want anyone to get close to her brother, so she doesn’t like Bua. Bua is not someone to take torture from people so she fights back. Recently they had an argument and Chanika used it to her advantage. Her client sent someone to push Chai’s sister down the stairs. They all think it is Bua due to their recent argument.

O… the guy that tried to rape Bua earlier at the party , is now married to her half-sister. He once again tried to rape her and Willy helped her on time. Chanika used it to her advantage again and hired her client again and sent someone to threat her half-sister. Everyone once again thought that it was Bua cause she recently had an argument with her. Next was the one that sent Willy mad. Chanika had hired someone to throw acid at her own face. Willy was furious with Bua. Bua was really upset also cause no one would believe her. Chanika’s last plan was for someone to throw rocks at the window in her room.

Later on Dodo suspects Chanika is going crazy and they follow Chanika and gets proof that she is the one that did all these things to herself and tells Willy and he is surprised that she will do such a thing. They all confront her and she goes crazy. Willy apologizes to Bua. Chai also asks her to get married. Just as an accident occurs at the new company that Bua’s dad and Chai are going into together. They go there to check on the problem and so does Willy and Chanika. Chanika holds a gun to Bua’s head and tries to kill her. As the building shakes Willy spots them both and goes to them. Chanika finally loses control of the gun and Willy goes over to pick it up. But the building lets go and the building collapse on them. All day and night they search for them under the piles of rocks and cement. While they were under there Bua and Chanika got trapped together and Bua took care of Chanika. They were finally rescued and Bua came back to find Willy. People give up cause it’s been two days but she’s determined that he’s alive.

She sits there and sings and talks to him and finally the next day they find him and she is at his side. Chanika watched it on TV and she knows that they love each other. Willy tells Bua that she was the reason that he couldn’t leave her and go to heaven. It was her singing that brought his soul back to his body. Chanika also leaves to free her mind. Dodo asks her is she can ever love someone else. Willy and Bua and her family go to her mother’s grave. Willy sees Bua and Chai talking and Chai takes her hand and Willy sees and get jealous. He goes sit on this rock and she comes to him. He tells her shouldn’t she be with the man she loves. She tells him that Chai told her to come to him. They talk about how they fell and then hug.