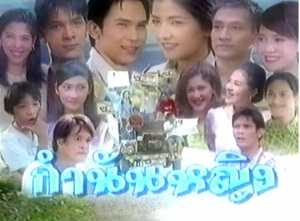 See Prai, a tomboyish girl protects the village from bullies. She herself became the bully but she only bully those who are bad/evil people. See Prai's father who is a kamnan(village chief) got killed in the middle of the night. This made all the people in the village concerned about who was going to be the next village chief. The bad rich guys decided to participate in this village chief race because they have bad intentions of using this village as an illegal site to do drugs etc. See Prai decided to partake in this event too because she sees that her village needed someone brave/good to help all the people living in the village. None of the villagers were able to withstand the bad/evil people except See Prai herself. No females had ever became a village chief which her sister, See Wan thinks that it's some childish act in which she discourages her little sister. But See Prai sees it as a source of energy/encouragement that women can became village chiefs too and that women can do just the same thing as men can.

Thana(Bee), a deputy who was assigned to go to See Prai's village to host the race in a righteous way so that there are no cheaters etc. On his way to the village, he was stopped by one of the sons of a rich man living in the village. See Prai came to help and it was love at first sight for Thana(Bee). See Prai went to host talk events in the village and this is what made Thana amazed at that a woman was able to do all these things. At last, See Prai won the title, village chief and she began to make the village a better place. Bpalat Thana (Deputy Thana) was impressed by all the things Kamnan See Prai (village chief See Prai) had set for her village. This made him begin in fall in love more with See Prai but everyone women in the village had fallen in love with Deputy Thana too including her sister, See Wan. The deputy was a handsome man who is a gentleman in which everyone women wanted. See Prai was the only woman in the village who didn't fall in love with Deputy Thana.....

Challenges arise in the village in which Village Chief See Prai had to encounter....would she fall in love with Deputy Thana or not? And how so? Will she be able to win against evil? (watch it at youtube, the user tuktukland or at 'http://www.youtube.com/watch?v=4N49PSHK5eY'