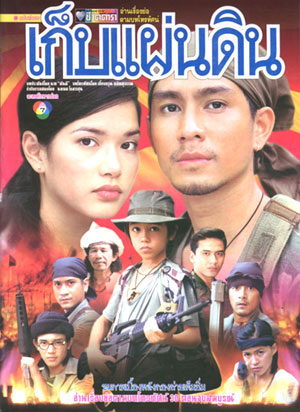 Mintada (Captain) grew up in Kasay, a war torn country. The leader of Kasay sends Mintada and Siplai to Thailand to further their education and bring back valuable knowledge to help Kasay. In Thailand Mintada meets and falls in love with Punpasa (Aom), the daughter of a well off family. However, Punpasa's family and Mintada's friend, Siplai don't approve of their relationship. Meanwhile back in Kasay, the leader and his wife were murdered after the leader had refused to give way to a group of drug dealers. This leaves Kasay under the hands of Naka (the leader's son) who is only a child. Upon completion of his studies Mintada and Siplai are to return to Kasay. With fear that they will forever part and from Punpasa's parent's disapproval of their relationship, Punpasa and Mintada decide to flee together for Kasay. However, Punpasa's parents with the aid of the police track them down and during the struggle Mintada was shot and he fell into the river. Punpasa was brought back home believing that Mintada had died. However Mintada was rescued that night by Siplai and brought back to Kasay. A few years passed by and through the years both Mintada and Punpasa have been torn by their memories of each other. Neither one have moved on, Punpasa framed and kept Mintada's gift to her while Mintada always stared off into the distance at Thailand. At an encounter with Chat (Por), a brave soldier Punpasa finds him to be similar to Mintada and they start to fall in love. With approval from both their parents they got engaged. Not long after two of Punpasa's closest friends came to her with news that Mintada may still be alive, with this news Punpasa decides to leave everything behind and travel to find Mintada. Punpasa and Mintada meet when he and his comrades rob a hospital camp of their medical supplies, Punpasa gets captured as a hostage and brought back to Kasay, where she meets Mintada. The two reunite their love and decide to get married, however Chat led a team of soldiers to retrieve Punpasa the night before the wedding and with Sawin (the country's enemy) leading an attack on Kasay Mintada couldn't go after her. Mintada finds out that Chat is Punpasa's finance during his second hospital robbery where Chat made an attempt to stop him. Punpasa and Chat talk and she returns him his ring. Kasay is invaded after 1 of the 3 Guardians of Kasay betrays the country and leads Sawin in for an attack. During the battle, many of Kasay's soldiers fell, while the civilians fled to Thailand. Mintada and Naka were about to make it to the shores of Thailand where Punpasa awaits for Mintada but Naka was shot and with that Mintada decides to not cross over to Thailand but to return to "Keb Pandin", retrieve the land.