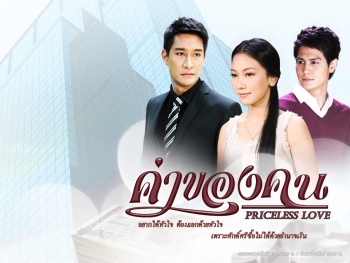 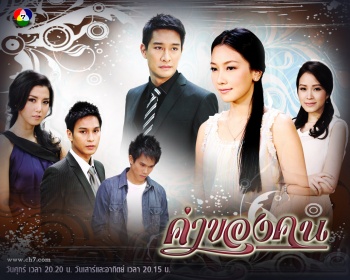 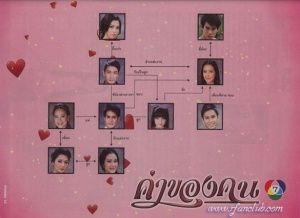 "One of those typical lakorns, an arrogant pra’ek with jealousy issues who falls in love with his brother’s girlfriend to whom he thinks is not good enough for his younger brother. Nang’ek is poor and in debt because of a her stupid older brother, he owes a group of hoodlums 10 million baht ($327,000 USD). For the sake of her older brother, when arrogant pra’ek offers her money to leave his younger brother to be his kept woman, she takes the offer and says she will do it for 10 million baht. They get married, crazy family drama ensues, jealousy because nang’ek does have a male friend who likes to hang around often, then they fall in love and all is forgiven." (From [1][Lyn's lakorn blog])

Luk (“Pong” Nawat Kulrattanarak) is the only son of His Highness Naruenat and Lady Sri. His Highness is an ambassador, thus the reason why the family moves around to new countries often. When he was a child, Luk realized the relationship between his family isn’t as good as it should be, especially with his parents who seem distant with each other. When they returned to Thailand, his father clearly shows his distance from his mother.

When his father brought another woman to live in the house, Luk was sent to learn abroad. Soon enough, his mother sent him news about his father being very ill. Luk returned to Thailand to check on his father’s condition. Once he returned, he found out the truth; Khun Kae was another one of his father’s wives and he had a little brother named Peemarn (Nam Rapeepat Eakpankul).

Before His Highness Naruenat died, he told Luk he wanted him to learn in the field of administration in order to follow in his footsteps. However, since he was prejudice against his father, he was not interested in what his father asked of him. Soon after, Luk returned to study abroad. It wasn’t long until Her Highness sent his brother from another mother, Peemarn, to study abroad with him. Though Luk liked traveling around instead of learning, once his brother came to study with him, he became strict with Peemarn’s education and chose his branch of knowledge as administration like his father had told him. Other than that, he loved and cared for Peemarn very well.

Khun Kae had sent news to Luk to tell him that Her Highness was severely ill and wanted him to return immediately. However, he returned a little too late as his mother had already passed. Before she had died, she entrusted everything with Khun Kae. Khun Kae had given everybody love like how an adult loves children, as well as respecting and being considerate of them, making the household remain and run smoothly.

Because Luk has experienced life in a good and bad way, after finishing his education he proceeded to take over the family business from his mom. Because of his resourcefulness and craftiness, he had made his business successful. In work, he has never been reprimanded from his family but his behavior has been reprimanded often. The criticism usually goes through to Khun Kae who decided that she would try and find a good woman that is suitable and qualified in many fields to marry Luk and Peemarn.

When Khun Kae had tried to find a wife for Luk but was unsuccessful, she decided to turn her attention to Peemarn because once he was married to a qualified woman, he will get promoted to ambassador. However, Peemarn already had a woman he loved so he refused. Therefore, she asked Luk and his secretary to help. Due to this, Luk met Rojarate (“Noon” Woranuch Wongsawan) who was the love of Peemarn. He told her to break up with Peemarn and that he would pay her 10 million baht. In order to not have any problems, he also signed a marriage license with her and would divorce her once he was certain that Peemarn would marry Nutta (a qualified woman) completely.

Though Rojarate sees love as prestigious, she only married because she needed to money to pay of her older brother’s, Gai, mortgage. Luk never saw the value of a person before and thought he could buy everything with money. This makes him think that Rojarate is like any other woman that does anything for money.

When Rojarate moved in with Luk, it made Peemarn very sorry and upset. He eventually decided to marry Nutta as his mom required him to though they did not love each other at all. When Rojarate moved in, Luk’s life started to change for the better and made his relationship with Rojarate improve continuously. Later, Luk adopted a girl named Margie and told Rojarate that it was his child with another woman when truthfully it was Peemarn’s. Rojarate cared for and loved Margie very much which made her and Luk finally love each other. She became pregnant but Margie soon died which saddened them both very much.

Soon after, they got into an argument where Luk accused of Rojarate still being in love with Peemarn and another man she has a picture of at the head of her bed which was really Gai. Rojarate returned back to her garden house but because of the love that Luk has for Rojarate, he followed her there and reconciled with her. The two finally understood each other and lived with each other happily ever after.