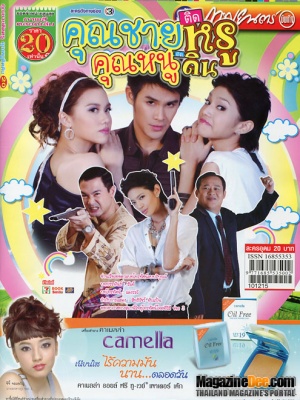 Mr. Elegant and Ms. Down To Earth / The Luxury Boy & The Down-to-Earth Girl

After the tulip flower festival in her village town passes by Jan Dong a ambitious young developer and the founder of funds for Kan Ket goes to Krung Thep to go visit the snack making company following the invite of Ying Jong Gon the wife of In. Even though Ying Jong Gon and In are wealthy people they have never forgotten their true roots and raise oxens in their huge estate.

Even though Jan Dong's arrival is approved by both Ying Jong Gon and Pra-in it causes the two to often argue and make sarcastic remarks towards one another because Jan Dong is the daughter of Poo Yai Meuang and Jan Da who were both Jong Gon and Pra-in former lovers. The reason that Jong Gon wants Jan Dong to work in her factory is because she wants to support Jan Dong's trial rice and the villagers to come and produce snacks in her factory. The more important reason is because she wants to change her no good son Khun Chai Autsaman. Autsaman is good at spending money and chasing girls on a daily basis. Especially girls like Nongpanga who Khun Ying Jong Gon doesn't really approve of. Jong Gon has forbade her son from involving himself with Nongpanga. The real woman that Autsaman really loves and want to marry is Kachamat a beautiful owner of a flower shop. Jong Gon approves of Kachamat,but Kachamat doesn't take interest in Autsaman. Instead she is interested in Laai Kaen. Laai Kaen is a country boy who lives not to far from Jan Dong. Laai Kaen received help from Jong Gon which enabled him to finish school. Autsaman isn't really happy about this, but he is unable to do anything. As for Laai Kaen he dares not think of a high statured woman like Kachamat.

Jan Dong has to disguise herself as a chubby person with crooked teeth because she doesn't want Autsaman to remember that she is a person that he once had a quarrel with. She also wants to teach him that both rich people and poor people are worth the same and he shouldn't look down on anyone. Jan Dong tells people she is Jan Dong the younger twin sister of Jan Dai. Autsaman feels uncomfortable that he has to pick Jan Dong up and take her home everyday. Coincidentally the apartment that Jan Dong lives at belongs to Nongpanga who isn't happy with seeing Autsaman pick up and take Jan Dong to work. She doesn't like Jan Dong because she had once had a quarrel with Jan Dong once at a Pub while she was with Autsaman.

After meeting in a pub coincidentally Kachamat and Jan Dong become fast friends. While working at the factory Autsaman and Jan Dong often quarrelled. On the final day of her trial period everyone threw a goodbye party for Jan Dong. Kachamat and Autsaman joined the party. Because of his jealousy for Kachamat and Laai Kaen. Autsaman got into a physical fight with Laai Kaen and made some remarks about his lifestyle. Laai Kaen angry decided to quit and return home with Jan Dong. After finding out Jong Gon and Pra-in are very upset and tells their son he must go and bring Laai Kaen back. He must also apologize for looking down on him. They also wanted to curve his bad ways by sending him to live with Poo Yai Meuang and Jandaa for 3 months. Autsama is resistant at first, but once he finds out that Kachamat is going to bring Laai Kaen back he has no choice but to also go.

Once Jan Dong returns home she finds that the place in which she stored her organic fertilizer testing was robbed. The person who did it was Sia Chatchai a wealthy businessman who sold fertlizer also. Sia Chatchai had the help of Tong and his daughter Saitarn (Saitarn is a daughter that Tong is keeping a secret from his wife and everyone else because he doesn't want his wife to know that he once had another wife and daughter because he is afraid that his wife will not financially support him anymore). Tong then blamed it on Chom Chayor who was a gambler that needed the money to pay his debts. As for Saitarn she gives herself to Sia in order to get a car from him so she can drive herself to various places to sing.

Once Autsaman has to stay under the same roof as Jan Dong. Jan Dong has to return to wearing her fake teeth once more. Everyone in the house is suspicious, but Jan Dong manages to escape suspicion. The only eye sight that she is unable to escape is that of Kan Kaew her younger brother. Laai Kaen also brings Kachamat to come and stay with Jan Dong because he doesn't want people to misunderstand them in a bad way. Jan Dong attempts to get back at Autsaman by sending him to watch the Fertilizer shelter in place of Tong. Even with a young man like Autsaman Sia Chatchai is still able to carry out his evil plans without fear. He sends Tong chemical substances in Jan Dong's test fertilizer. He also sends his minions to hurt Autsaman, but Jan Dong and her parents are able to come and save him. Even so Autsaman is still physically hurt.

After this incident Jan Dong and Autsaman starts to feel a little better about one another, but they refuse to show any of their feelings because Autsaman believes that Laai Kaen likes Jan Dong and Jan Dong believes that Autsaman loves Kachamat. This is different from Kachamat who is brave enough to show her true feelings for Laai Kaen, but as time goes by she begins to pity herself because she believes that Laai Kaen does not feel the same way. Jong Gon finds out about her son and immediately return to Khao Dtaiyen without realizing that Nongpanga is following right behind them. As for Laai Kaen he is returning to his own plantation because he promised to Autsaman that he would never involve himself with Kachamat anymore.

Jong Gon and In stops at Laai Kaen's house and Nongpanga once she finds out that Autsaman is staying at Jan Dongs place she quickly goes there. Laai Kaen brings Autsaman's parents to see him and Autsaman tells him he doesn't have to go anywhere anymore. Laai Kaen insists on going to run his own plantation. Nongpanga is confused on where to stay as she parks on the side of the road and as she is thinking Sia Chatchai passes by and she is extremely happy because he is her uncle. Kachamat see's the opportunity and goes to stay with Laai Kaen along with Jong Gon and In (Autsaman's Parents).

Kaen Kaew takes Autasaman to see the plantation and while they are there they see bad guys who were Sia Chatchai minions attempting to pour snails into Jan Dong's rice plantation. Jan Dong who was looking for Kaen Kaew also sees the bad guys. The two fight the bad guys off and while fighting Jan Dong's fake teeth falls out. In order to hide her secret she tells Autasaman that she is Jan Dai. Sia Chatchai calls his minions to hurry and leave because once Poo Yai Mueang heard the gunshot he should be bringing people to the scene. Nongpanga who comes and see Jan Dong without her false teeth believes that it is Jan Dai who she once had a fight with and the two begin physically fighting. Jan Dong then pour the bag of snails onto Nongpanga's head. Once the villagers arrive Nongpanga blames Jan Dong and frames her for attempting to pour the snails into the crop. The villagers are now suspicious because once Jan Dong returned and Autsaman followed the village has gone countless hectic situations everyday.

Autsaman takes Nongpanga back to Poo Yai Meuangs house and asks for his other daughter. Poo Yai Meuang and Janda is confused. Before they could say anything Kaen Kaew pulls Autsaman into his room so that Nongpanga can sleep in Jan Dong's bedroom. Autsaman is unable to sleep because he kept thinking about how while they were fighting the bad guys before she fell it was Jan Dong, but after she got up how did it turn into Jan Dai. Poo Yai Mueang and Janda is suspicious so they go and ask Jan Dong for the truth. Jan Dong is unable to lie anymore so she tells them the truth. Kaen Kaew is pretending to talk in his sleep and slowly lets out information of Jai Dai and Jan Dong because he wants Autsaman to know they are the same person. Autsaman is starting to put the story together and goes to find Jan Dong. He realizes she is missing and asks Leelawadee her tortoise to take him to Jan Dong. Leelawadee takes Autsaman to the field where he sees the false teeth. Jan Dong who went to find the teeth also sees it. As the two fight to grab it Leelawadee the tortoise eats it. Finally Autsaman finds out that Jan Dong and Jan Dai are the same person.

Sia Chatchai attempts to make Jan Dong and Chom Chaya have conflicts with other another with the help of his niece Nongpanga. Nongpanga pretends to be nice to Chom Chaya so she can use him. This doesn't escape the sight of Sai Tan. Deep down Sai Tarn wants to expose Sia Chatchai and help Jan Dong, but she is to afraid to. Kachamat is still strong by her love for Laai Kaen and even attempts to seduce him at his home, but Laai Kaen looks past it and doesn't show any emotions. Kachamat is embarassed and leaves back to Krung Thep. Once she is gone Laai Kaen realizes that he did not want her to leave because he was slowly starting to realize he loved her. He follows her to Krung Thep and attempts to win her back, but Kachamat doesn't show any signs of softening up. Kaen Kaew devises a plan by calling Laai Kaen to tell him that Jan Dong has been hurt. Laai Kaen immediately returns home. Once Kachamat realizes what had happened she quickly follows Laai Kaen back.

Jan Dong is stressed about the things that have happened and doesn't know what to do so she goes to a cliff to express her worries. Autsaman comes and find her and they talk everything out and understand one another. As they separately drive home Nongpanga sends Sia Chatchai's men to attack Jan Dong. Luckily Autsaman is able to save her. While this is happening they see Chom Chayor driving by and believe it must be his work again. Chom Chayor himself is attacked and hurt. Once he runs into Nongpanga she attempts to tell him and make him believe it must be Jan Dong's people.

Sai Tarn knows of the evil deeds caused by the uncle and niece and begins to have pity for Jan Dong, Chom Chayor, and everyone else in the village who is inadvertly and directly hurt by Sia Chatchai's plans. She attempts to expose the two for everything they have done to help her fellow villagers. Even after everything has settled there is one important matter and that is the love between Laai Kaen and Kachamat, Autsaman and Jan Dong. How will these Love Stories end?