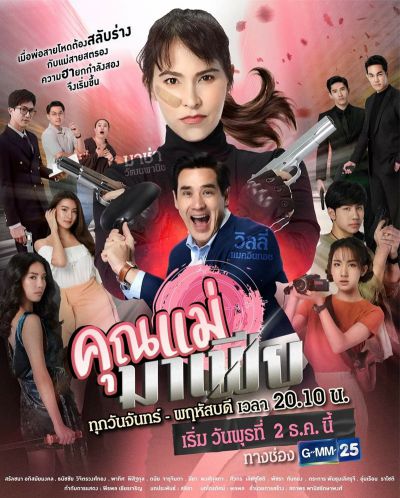 Tiger, a great businessman who plays the role of the head of the band of winged tigers. Mafia gang in Japan who flies back to find his first love, Phin Thong before finding out he has a daughter with him! The accident and murder woke him and her in each other's body. Therefore, the father who has never served (But now in the maternal body) must go out to re-establish a relationship in the family. (Source: gossipstar)

Another Synopsis --> The story begins 18 years ago. Phayak is a 20-year-old bright-faced young man who dreams of becoming a rapper. But he was born as the only heir to the famous Tiger Wing mafia gang, which has many businesses in Thailand and abroad. His youthful life was coerced, even when he found love with Phin, a beautiful and sweet girl from the same university. Both of them had sworn in front of the Sacred God to care and sacrifice for each other forever. But after that, their love had to come to an end because Payap, the father of Phayak, commanded his son to inherit the position of leader of the Winged Tiger Organization, having to cut off with his girlfriend without saying goodbye and without knowing she was pregnant. 18 years later, Phayak became the head of the influential organization, and he has a reason to come back to Thailand again with Manas, his close subordinate. While Phin is working at the museum, Phayak follows her to ask about Keng, who he met before, because he suspects the girl is from his own blood. But before talk about it, Chi Fong, shot Phayak while hugging Phin, causing a bullet going through her body. The next day, Phayak wake up first to find his soul in Phin's body. Shocked and confused, he tries to find a way to return to his body, while Phin come to her senses in Phayak's body. Phayak is forced to tell the story that switched their bodies to Manas for trust. Living in the other's body begins when both of them are discharged from the hospital. (Source: thairath.co.th)