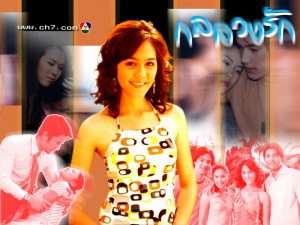 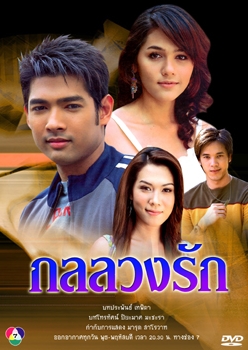 Sita and Rada go to study abroad and Sita returns to Thailand first without Rada since Rada is sick in the hospital, leaving Rada in the care of her close friend, Johnny. Sita's father can't pick Sita up from the airport, so he sends Narong in his stead. Narong is planning to take his revenge out on Sita and takes her to forest, Sita starts freaking out but they soon are on the run together after some gunmen follow them into the forest. Jarawee's father has been wronged by Sita's father and he sends his men to kidnap Sita as an act of revenge. Narong is dragged along with Sita where Ja's father reveals his plans and his reasons behind it. Sita and Narong manage to escape. Sita is fussy and loud and the only way that Narong can keep her quiet is by kissing her and they end up staying the night in the forest. Ja has been slowly seducing Sita's father in order to get close to him and she asks to tag along with him when he goes to look for Sita. Ja's father catches up to Narong and Sita and Sita'a father arrives with police and he shoots Ja's father, killing him right in front of Ja but Ja can't go to him. Rada meets Narong and recognizes him as Noparut but Narong denies it.

Ja and Sita'a father get married and Ja plays the part of a loving and dedicated wife. Sita's father wants to play matchmaker for Sita and Narong, frustrating Ja because Ja herself is falling for Narong. Narong and Sita enjoy annoying each other and trying to get on each other's nerves. Sita wants to prove herself as a serious worker in the company and her father decides to entrust her with Narong and get him to help train her. Ja convinces Sita's father's secretary to start poisoning her husband because he has also caused his secretary's parents to commit suicide and out of guilt he has supported his secretary ever since. Ja also gets her brother to come live in her house and gets him to try to seduce Rada but he is more interested in Sita and is also simultaneously sleeping with the secretary. Ja also tries to come between Sita and Rada, knowing that Rada has feelings for Narong. She tells Rada that her father is trying to play matchmaker for Sita and Narong.

Rada starts getting suspicious of Sita after witnessing Narong getting physical with Sita because Sita slapped him for calling her useless. She confronts Sita about Narong and Sita angrily denies feeling anything for him. Sita'a father invites Narong to a beach vacation with his family. Sita invites Johnny, who has established that he has feelings for her but Sita sees him as just a friend. Her father isn't too happy that Sita is close to Johnny and hopes that Narong can get together with Sita instead. Sita gets jealous seeing Ja with Narong and she taunts Narong about wanting her stepmother. Narong gets frustrated and kisses her and tells her that he doesn't feel anything for Ja. Sita then tries to make Narong jealous by telling Johnny she might marry him but Johnny gets mad at her, knowing that she is doing this to hurt Narong. Narong goes to find Sita alone after witnessing the incident and he grabs hold of her and reveals that he is in love with her and hugs her. Rada witnesses and runs off, hurt that Sita has denied having feelings for Narong.

Ja slowly poisons Sita's father, along with the secretary and Sita's father starts getting sick. Ja also lies and tells him that she is pregnant so he can add her to his will since he has told her that he is leaving everything to just his children, not her. Ja and Narong find out each other's true identities and they confront each other about it. Ja invites Narong to work together to get revenge since they share the same enemy. Narong eventually agrees to work with Ja just to know what she is doing and hopefully stop her because he realizes that Sita's father isn't a horrible person and he doesn't want to hurt him. Sita sees them together and is suspicious and tells her father. Ja makes up a sob story when confronted and Sita's father accuses his daughter of being jealous and slaps her. Her father ends up having a stroke from all the poison that he has ingested and he becomes handicap, only then does Ja reveal herself and her plans but he can't talk so he can't tell anyone.

The secretary finds out she is pregnant with Ja's brother and she tells Narong about Ja poisoning Sita's father. He takes her to hide out in the countryside and he sends the poison packet to a lab to test. Ja tries to get her brother to lure the secretary out and lies that she won't do anything to her. Sita goes to Narong's house and meets his aunt who accidentally reveals Narong's true identity. Sita goes to confront Narong and tries to pay him to go away but Narong is offended that she sees him as a money hungry person and rapes her. Narong tells her that he'll take responsibility and Sita tells him that that is payment for what her father did to his father and asks for them to no longer see each other. Narong goes to live in the countryside and the secretary sneaks out to see Ja's brother and ends up being shot at by Ja's gunman. Her brother realizes that he genuinely loves the secretary and lies to his sister that she died. Ja goes on the run and hides out. Sita finds out that she is pregnant and Rada goes to tell Narong, who rushes to get back to Sita. Ja's brother tries to get his sister to turn herself in and tries to get her to trust him. Ja orders him to kidnap Sita and when he does, he calls Narong. When Narong arrives, Ja shoots him and the police arrive, causing her to shoot herself in the head.

Narong is in a coma and he wakes up to find Sita who expresses her regret that she almost ruined their chance to live together as a family; father, mother, and child. Narong apologizes to Sita's father and gets Sita to say that she loves him. It turns out that Sita's father hated Narong's father for stealing the woman he loved and that was the catalyst for his bad deeds. He remains unable to speak but can walk. Sita gives birth to a daughter and Johnny and Rada end up together. The lakorn ends with the family all together and Narong asks for Sita to give their baby a sibling. By: Cupid Candy