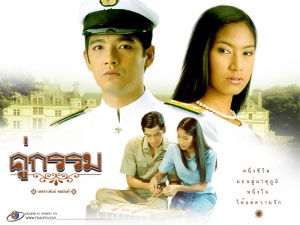 A love story set during World War II. Japan invades Thailand and sets up ship harbors near the Chaopraya River, close to where Ang(Benz) lives. She is against the war and is angered that japanese soldiers have moved into her home area. With this, she has a hatred towards them. Kobori(Num) is a japanese soldier who meets Ang by chance and falls in love with her at first sight. She however hates him because of her hatred towards the war and is cold to him. Even though she's bitter and cold to him, Kobori still loves her and treats her with love, warmth,care and respect. Due to false rumors that would harm Ang's reputation, Kobori decides to marry Ang. Ang refuses to marry him, because she is still waiting for her boyfriend Vanas to return from his studies in France. Because Ang's dad is a high ranking thai political figure and Kobori's uncle is also a top ranking japanese general, they are forced to be married to tighten the thai-japanese bond. Kobori's love and affections slowly begin to thaw the cold heart of Ang and she begins to return his love. But as feared, her long awaited boyfriend secretly returns to Thailand in hopes of renewing his love for her, and to kill the man who forced her to marry him. Who will she choose to be with? What will become of Kobori?