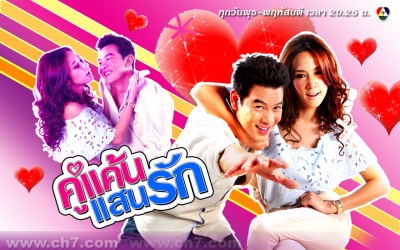 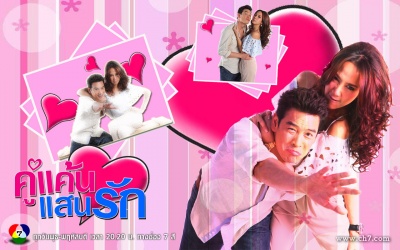 So we have “Aum” Patcharapa Chaichuea as a ‘hao hao’ roughneck farm girl named Ing Dao. She has a younger sister named Ing Jan played by ‘Tubtim’ Aunyarin Theerathananphat. They own a piece of land that Songkran (Chakrit Yamnam) wants. He is ordered by his father to buy up land in Ing Dao and Ing Jan’s area and build a resort, but Ing Dao’s father Saeng is not selling.

One day when Ing Jan and her friend Marin went to Bangkok in search of work, Songkran hires them out of pity. Marin has a big red birthmark on her face, everyone is like terrified of her. When he learns that Ing Jan is the daughter of the owner of the land he wants, he decides to date her until she gives up the land to him without limitations. He succeeds and Ing Jan does give up her share her share of the land to Songkran. Soon after, he dumps her to go back to his model/actress girlfriend Rosita or Rose (‘Kamboom’ Pimnipa Jittiteeraroj). Ing Jan is devastated and tries to kill herself but fails because her sister Ing Dao was there to save her in time.

Ing Dao is livid when she learned what happened to her sister Ing Jan, she wants revenge and she wants her land back. At first, she does the reasonable thing of going to his house and asking to buy her land back, but his hi-so mother and sister calls the police on her. She lands in jail. From jail, Ing Jan contacts her friend Mod Daeng (Nadia Nimitwanich) for help. She tells Mod Daeng everything about what happened to her sister Ing Jan and Mod Daeng is livid also. She passionately detest philandering men. So it time for revenge, starting with Ing Dao’s look. Since Ing Dao is going to be the one seducing Songkran, she has to look the part. She is transformed from a plain Jane with a big black mold on her face to a goddess like figure. Now let the games begin.