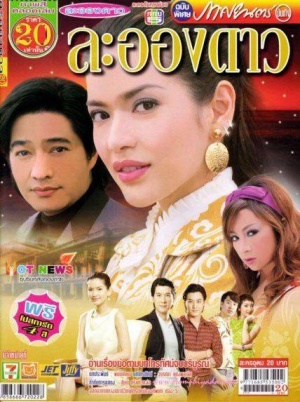 Korakot Benjarong came back from the State immediately after hearing about the death of Dr. Krai Benjarong, his father. On the first day he arrived Thailand, Lord Autthawatee, the family’s lawyer, informed him about the will that his father had prepared. It was as if he was strike by a thunder. The condition in the will stated that he would get his father’s entire asset only when he marries La-ong Dao, a girl who was raised as his sister. La-ong Dao was an orphanage who Dr. Krai had adopted since she was born. However, Korakot had never met with La-ong Dao before because he was sent to study in the States since he was a child. Every time Korakot came back to visit his parent, he would missed La-ong Dao who was sent to a boarding school in France. The only memory Korakot had about La-ong Dao was that she was “a chubby and grumpy little girl.”

Korakot did not agree with the condition in his father’s will because he already had Padachamai, a jetset limelight lover, as a girlfriend. He thought that La-ong Dao wanted to claim his father’s asset and had seduced him to write such condition in the will. However, the condition in the will had stated that for the next three years, if La-ong Dao refuses to marry him or marry with other man, this condition would be cancelled and Korakot would get all of the assets. Therefore, Korakot hired Tawatchai, his slippery playboy friend to approach La-ong Dao with the hope to change her mind so he could marry with Padachamai. The first time he met with La-ong Dao, Korakot was surprised in many ways. Since La-ong Dao had grew up into a beautiful lady with her heart full of dignity. However, with all of his bias, Korakot reproached La-ong Dao to about her greed for his asset. He also told her that he did not agree with the condition in the will and would never marry her. La-ong Dao was astonished and replied that she did not know about the will before. She also admonished him that if he did not wanted to abide by the condition, she would be gladded to step over and let him get all of the assets. Her statement made Korakot felt very embarrassed.

Padachamai pouted on Korakot when she knew about the conditions in the will. So, Korakot spent money like water to take her out. When the money ran out, Korakot went to see Lord Autthawatee to get more money. However, Lord Autthawatee told him that he could not give Korakot more money because it was another condition in the will. So, Korakot realized that La-ong Dao had nothing to do with this will and she did not even take the monthly allowance that the will stated. Moreover, when La-ong Dao knew that Korakot wanted more money she gave up her part to him and took Korakot to get money from the safety vault that Dr. Krai had left before his death. Along the way, the light suddenly went out and caused La-ong Dao to stumble over Korakot who helped her and later carried her out of the building. This closeness made the two to feel some chemistry for each other. Nevertheless, after this incident La-ong Dao tried to distant

Tatchai approached La-ong Dao through Korakot’s introduction. During the time that Tatchai went to Korakot’s place to see La-ong Dao, Korakot began to feel jealous without knowing it. The colder La-ong Dao acted to him, the more sarcastic he became when talking to her. Therefore, the two of them had an argument frequently. The ego, self-esteem and stubbornness made Korakot concealed his true feeling that he had for his adopted-sister.

La-ong Dao decided to look for a job to free her sooner. She applied for a job as an attendant at the Noppadol Palace that belongs to Princess Prawnabhang Noppadol, an old lady who used to be the queen of the Lao Kingdom, who chose to have a simple life in Thailand after the husband passed away. The Princess was very kind to La-ong Dao and felt very acquaint to her since the first time they met with each other. So, the Princess gave the job to La-ong Dao immediately. That day, the Princess asked Prince Kham-In, her distant nephew, to drive La-ong Dao home. Korakot saw that a man drove La-ong Dao home so he interrogated her and forbade her to take this job.

One day, Korakot set up a party at home. Padachamai also came to the party and took this chance to hassle La-ong Dao and condemned that she stayed there because her greed for the asset. La-ong Dao wanted to leave the house to she went back to see Princess Prawnabhange again. The Princess accepted La-ong Dao to work and this time she would not listen to Korakot again. At the Noppadol Palace, La-ong Dao saw a picture of a man and strangely felt very acquaint with him. Later, she found out that the man in the picture was Prince Chakrachai, the Princess’s only son who gave up his engagement with the Princess of Cambodia to marry an ordinary Thai woman. The prince was exiled from the throne and accused to be a communist. So, he had to escape into the forest. Later, when the King and the Queen forgave the Prince they only found that the Prince had passed away. Prince Sadayu, another nephew of the Princess, had just come back from France. When he met La-ong Dao, the Prince was very impressed in her and invited her to his birthday party but La-ong Dao humbly refused.

There were so many guys wanted to approach La-ong Dao from the graceful Prince Sadayu, Prince Kham-In who drove La-ong Dao home for several times and Tatchai who began to fall in love with La-ong Dao seriously. Korakot became very upset and picked at La-ong Dao all the time. But every time, La-ong Dao would counter him coldly. Korakot told his driver to send and pick up La-ong Dao and spied on her. La-ong Dao was very frustrated but retaliated by go back home late at night. The Princess realized that something must be going on between Korakot and La-ong Dao so she accepted Prince Sadayu’s invitation to his birthday party.

At Prince Sadayu’s birthday party which crammed with people from high society including Korakot and Padachamai. Padachamai was certain that Prince Sadayu would ask her to dance with him at the floor opening and acted as if she was very familiar with the Prince and paid no intention to Korakot at all. When Princess Praonabhang’s car arrived and Prince Sadayu went to welcome her. It turned out that the Princess had sent La-ong Dao instead. Everybody at the party was stunned by La-ong Dao’s beauty. Prince Sadayu asked La-ong Dao to dance on the floor opening. Padachamai intended to humiliate La-ong Dao by splashing a glass of punch on her but Korakot stopped her in time. The punch splashed over Padachamai instead which made her very angry at Korakot. Korakot did not try to make up with Padachamai like in the past. Instead, he went boozing because of disappointment. Padachamai now took La-ong Dao as her rival so she went after La-ong Dao and hassled her to back off from Korakot and demanded for the marriage refusal letter.

Korakot found that La-ong Dao had signed on the letter to refuse marriage with him and alleged that she would not take any asset. He was heartbroken and went back to drinking until he fell ill. Korakot refused to see the doctor so Chuanchom had to tell La-ong Dao to take care of him until he got better. When they almost understand each other, Padachamai came back to Korakot again in afraid of losing him. Korakot now realized Padachamai’s true character so he refused to see her again. Padachamai put all the blame to La-ong Dao and thought that La-ong Dao would never let Korakot go. She hired a hitman to shoot La-ong Dao but Korakot saved her in time. La-ong Dao was seriously injured. The hitman was arrested and confessed that he was hired by Padachamai. Padachamai was arrested and sentenced up to the law. This time, it was Korakot’s turn to take care of La-ong Dao until she recovered. Tatchai told Korakot that he really fell in love with La-ong Dao and did not want any pay. Korakot had to step aside for his friend. Tatchai proposed to La-ong Dao but she neither accepted nor refused. Instead, she asked him to see each other for longer. Tatchai doubted that La-ong Dao may fell in love with someone already.

When the three years condition in the will was over, La-ong Dao asked to move out of the Benjarong Resident right away. However, Lord Auttahwatee asked her to pick up her 25th birthday present that Dr. Krai had prepared for her before his death first. Korakot volunteered to pick up the present for La-ong Dao and she allowed him to open the present before her. It turned out that the present was a letter and the real birth certificate of La-ong Dao which revealed her true identity. At last, Korakot knew that La-ong Dao was the only daughter of Chakrachai Noppadol. So, she was actually Princess La-ong Dao Noppadol, the long lost granddaughter of Princess Prawnabang! Korakot took that letter to Noppadol Palace by himself. Princess Prawnabhang was very excited and got faint. At last, the long lost grandmother and granddaughter reunited with each other again. La-ong Dao moved to stay with her grandmother at the Noppadol Palace.

After La-ong Dao moved out of the Benjarong residence, Korakot isolated himself from other because of the pain and sadness. He finally realized that his father had tried to match him with such perfect lady like La-ong Dao. But he was the one who did not realize the truth and let the woman who was the love of his life to get away. He then decided to go back to live at the States and dedicated all of the assets to public charity. As soon as La-ong Dao found out about this, she went after him and stopped him in time. At last, Korakot gave up his stubbornness and confessed that he fell in love with her at the very first sight. However, he had tried to conceal his love of her out of his ego and had been in pain since. La-ong Dao asked him to go back with her and fulfill the condition in the will that once bound them together. But this time, it would be done because of their willingness.